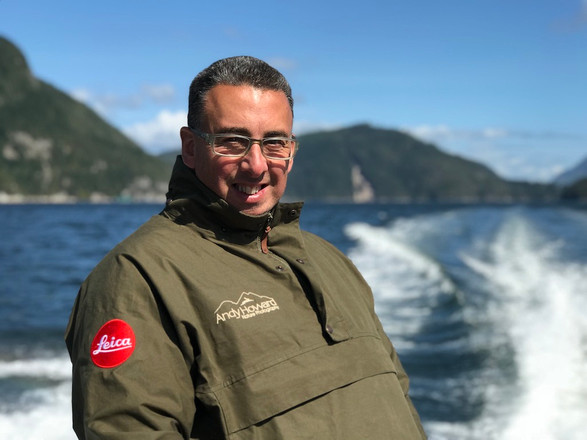 Hello and a very warm welcome.

I was born in England and moved to Fortrose on the Black Isle aged ten years in 1980. Even before moving to the Highlands my love of wildlife had been nurtured from a very early age thanks to my parents and one of my primary school teachers. My early encounters with Scottish wildlife were during our family holidays, most of which were taken with in the Eastern Cairngorms, the Isle of Skye or at our family’s home on Mull, and it’s here that my deep rooted love for wild places grew. Encounters with Golden Eagles, otters and deer were an almost daily occurrence, each and every time these encounters were treated as something special.

School and academia was never my thing and I bumbled through my education really only passing the time, and my first real job was working on a Salmon farm near Ullapool, again not my scene. I drifted around for a few years from job to job not really achieving anything or getting anywhere fast; I worked as a barman, ski instructor and ski technician, on a golf course and in a museum. It wasn’t until my mid-twenties and a foray into retail, that I thought I’d found my forté. Starting at the bottom rung of the career ladder, fast-forward twenty odd years later, I ended up running one of the most successful independent garden centres in the U.K.

My photography career began at a very young age with a second-hand Kodak box brownie, of course my skills (if indeed I had any) left a lot to be desired! It wasn’t until my 18th birthday I took the leap into the world of SLR cameras. With a pocket full of birthday money I took the train to Edinburgh and made a beeline for Jessops camera store. When I was asked what type of camera I wanted, I had no idea, and just handed over the money I had. As I sat on the train heading back to Inverness I was totally perplexed by my new Minolta X300 and Tokina lens, so many numbers, dials and switches. I learned by getting out there and I’m totally self-taught, and spent a lot of money wasting film whilst learning. Gradually my images improved, thanks in turn to a couple of upgrades along the way. After the Minolta came a Canon EOS600 followed by the new high-tech EOS 5 with its infra-red eye focusing system. It was around this time that I started selling a few prints here and there, only for pin-money but enough to invest some of it back into my first Canon pro-lens. Back then it was only really professionals that owned white-lenses. The only way I could afford one was to take out a bank loan to buy it, and my parents thought I’d gone mad.

Instantly my images improved and I focused my attention on the Dolphins at Chanonry Point, less than a mile from our house. It was very different to how it is there today. There would be maybe a maximum of two or three photographers at ‘the point’ then, not the hundreds we find there today.

After a break from photography to pursue another one of my life’s passions, fly fishing. I had put the cameras away and had forgotten about them. It’s only when Lyndsey, my fiancée at the time (now my wife), suggested we take up photography again as a way to spend more time together.

We duly ordered a Canon 550d with a 18-55mm kit lens and there started the journey into digital photography, and what a revelation it turned out to be. No expensive transparencies, no waiting for the lab to process and post back your slides, instant results!

Almost instantly I felt that digital photography was going to take me somewhere. I didn’t know where, but I had a gut feeling it was going to lead to good things. In September 2011 I had a breakthrough. I’d been photographing red squirrels near Aviemore and had noticed an old birch stump close-by, and I thought to myself, wouldn’t it be wonderful to get a wide-angle picture of a squirrel on that stump. I returned the following week with the kit I needed to make that picture in my head become reality. In the end it only took and hour or so, a very friendly and compliant squirrel did his bit and hay presto, I had captured my first ‘pre-conceived’ image. After posting it on my Flickr stream I was contacted by BBC Autumnwatch, seeking my permission to show the image on the show. It was indeed featured on the programme and was followed up by a press agency asking to run the image in the national press. This is where things started to gather pace, I had begun to take my photography a bit more seriously, and in hindsight, my ambition was well in excess of my ability! I started to improve and began to think more about how I took pictures, using my acquired knowledge not only on the technical aspects, but the importance of light and backgrounds. I fell in love with soft back and foregrounds with just the subject in the focal plane. Not favoured in competitions at present, but it’s how I like to take capture images, and that should always be the number one priority, take photographs to please you and nobody else!

In 2015 with the full support from Lyndsey I took the plunge to turn my hobby into my profession. I had many people telling me how hard it would be, and they were right! Luckily in my varied and eclectic career I had gathered many life skills that were put to great use, and indeed still are.

Appearances on the BBC’s One Show and Countryfile along with many articles and features published in a wide variety of periodicals and newspapers have helped me on my way. The proudest achievement to date for me has to be my first book, published in October 2018. The Secret Life Of The Mountain Hare took seven years to come to fruition and to finally see it in print was a dream come true. More books are planned and work on the second is well under way.

A major part of my life as a professional entails running workshops, masterclasses and photo-tours. I love doing this and relish the opportunity to improve and encourage my guests/clients to improve their photography skills whilst at the same time capturing images they can be proud of. Many of my guests/clients have gone on to win competitions with images taken whilst out with me including a category win in the BWPAs!

Thank you for taking the time to read my bio, I sincerely hope you enjoy browsing my website and its content.