Cherished Moments with a Wild Otter

One hundred and fifty one glorious minutes in the company of an Otter.

To share a moment in the company of any wild animal is a moment to cherish but for me one of the most memorable was an intimate moment shared with an Otter on Mull.

In February 2013 Lyndsey and I took a short break to the Isle of Mull; to me Mull feels like a second home as my family have owned a property on the island for the past fifty years. Whilst growing up I spent a lot of time there and because of this the wildlife was always accepted as part of the surroundings. Often an eagle would fly past the house we would stop what we were doing, acknowledge it with a glance and then continue with the task in hand!

Having recently rediscovered a passion for wildlife photography my awareness of the nature that surrounds us has been rekindled. One species above all else that has always intrigued me is the Otter, a very beautiful and undeniably cute creature, perfectly adapted to its environment they are at times almost impossible to spot when in and amongst the seaweed. 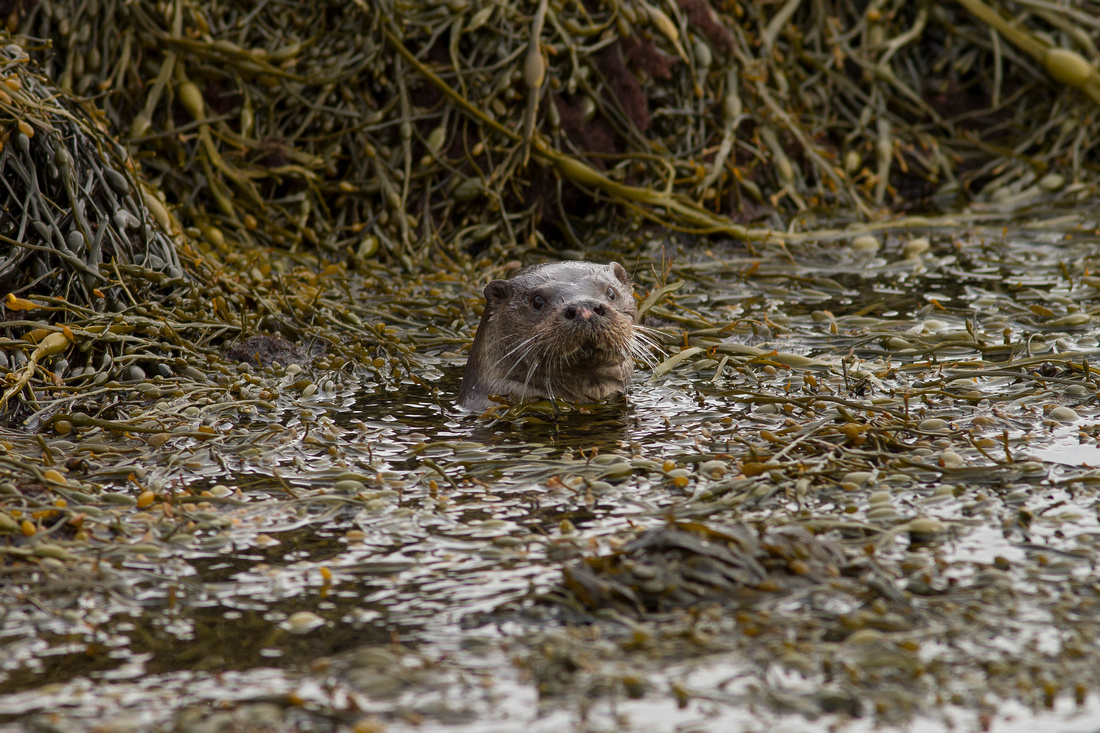 This particular encounter took place on a rather grey and damp February morning, it was exactly 10:47am when I took the first image of this particular Otter, in total I spent a glorious one hundred and fifty one minutes in its company. That’s over two and a half hours spent in close proximity to a wild otter!

We first spotted the otter fishing close to the shore over two hundred metres from where we were, we took our time in establishing its direction of travel, the next decision was where the best vantage point would be? I had to take into consideration the wind direction and where the best cover would be, unfortunately on this day the wind was blowing in from the same direction as the sun was glaring, this meant most photo opportunities would be pointing directly towards the sun.

In situations like this it helps to try to think like an otter, where along the shoreline would I be most comfortable at if I were an Otter? This tends to be rocky outcrops or peninsulas, more often than not the ones reaching out furthest into the loch.

Stalking an otter can be very tricky, hazardous and incredibly hard work, tricky because what they may lack in having poor eyesight they make up for with an acute sense of smell. By far the best way to start is by studying what the Otter is doing, how long is it diving for and how long is it staying out in the water before returning back to shore. Most Otters do have a behavioural pattern. The hazardous and hard work comes from the mad dashes from one bit of cover to the next whilst the Otter is diving, more often than not this is over very slippery boulders and I’ve come a cropper a few times. Luckily for me there have so far been no serious consequences to me or my equipment.

On this occasion I was treated to some very close encounters with this Otter at times to within a few metres, one thing I did notice was that it was particularly aware of the noise of the camera shutter. To compensate this I was more cautious when taking an image, this seemed to work and as the time went by it seemed to accept the noise and carry on as normal. At one point I was caught out by how close it came to me completely oblivious to my presence. Unfortunately for me though I was laying on top of a very uncomfortable boulder, that I could live with but at the same time I was also holding my legs in the air. All I could do was slowly and gently lower my legs, what I didn’t know at the time was I was lowering them into a rock pool, down they went into the icy cold water, now my boots were filled and I was well and truly soaked to the skin! 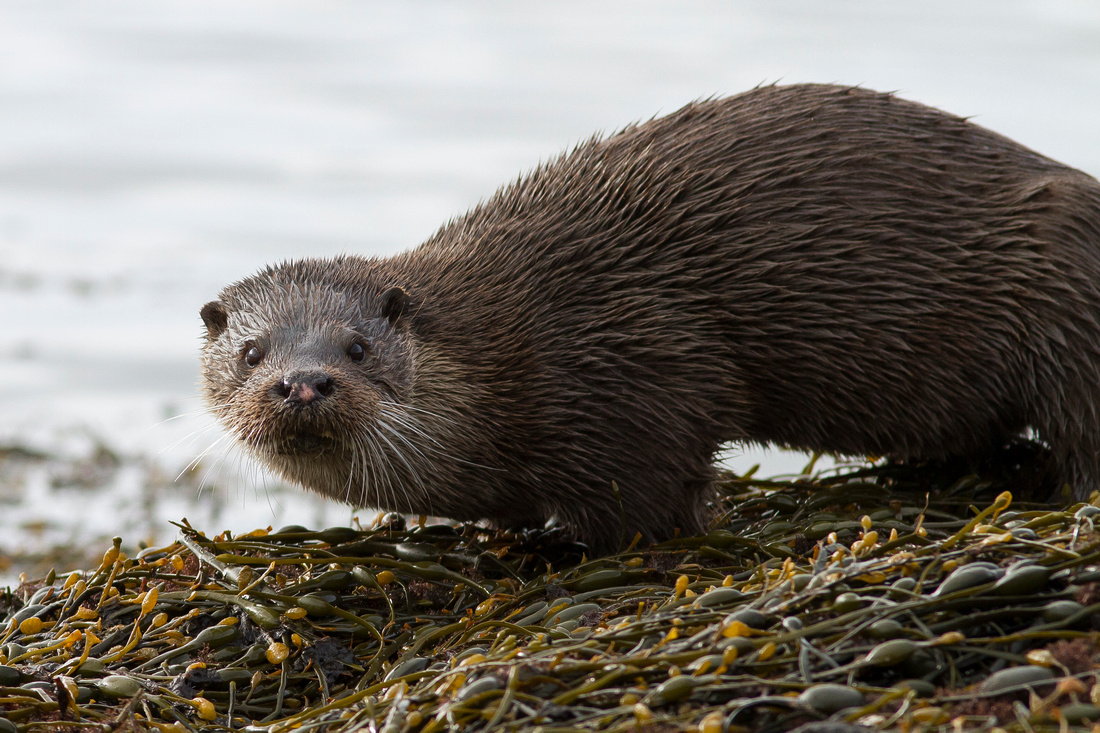 As the minutes passed by and turned into hours I was well and truly engrossed in the comings and goings of this Otter, at one point it decided to take a break from fishing, it rolled around on some seaweed, curled up and fell asleep. It was at this stage that Lyndsey appeared on the hill side wondering if I was still alive! I had to indicate to her where the Otter was and that it was curled up and sleeping.

In the final hour the Otter carried on going out into the Loch catching fish, eating its smaller catches whilst in the water and then coming ashore with the larger ones. It was during one of its return trips towards the shore that I observed at close hand how quickly they can disappear into their surroundings. As a small fishing boat passed our position the skipper saw me and very kindly moved further away from the shoreline, I waved to say ‘Thanks’ turned to where the Otter was just a few moments ago and it had vanished, it took me a moment to realise that one of the pieces of kelp now had whiskers! The otter had without a trace submerged and resurfaced using the kelp as camouflage. This clearly explains why in the past I’ve managed to lose sight of them so easily, there was no way anyone would have spotted that Otter hiding under in the kelp. 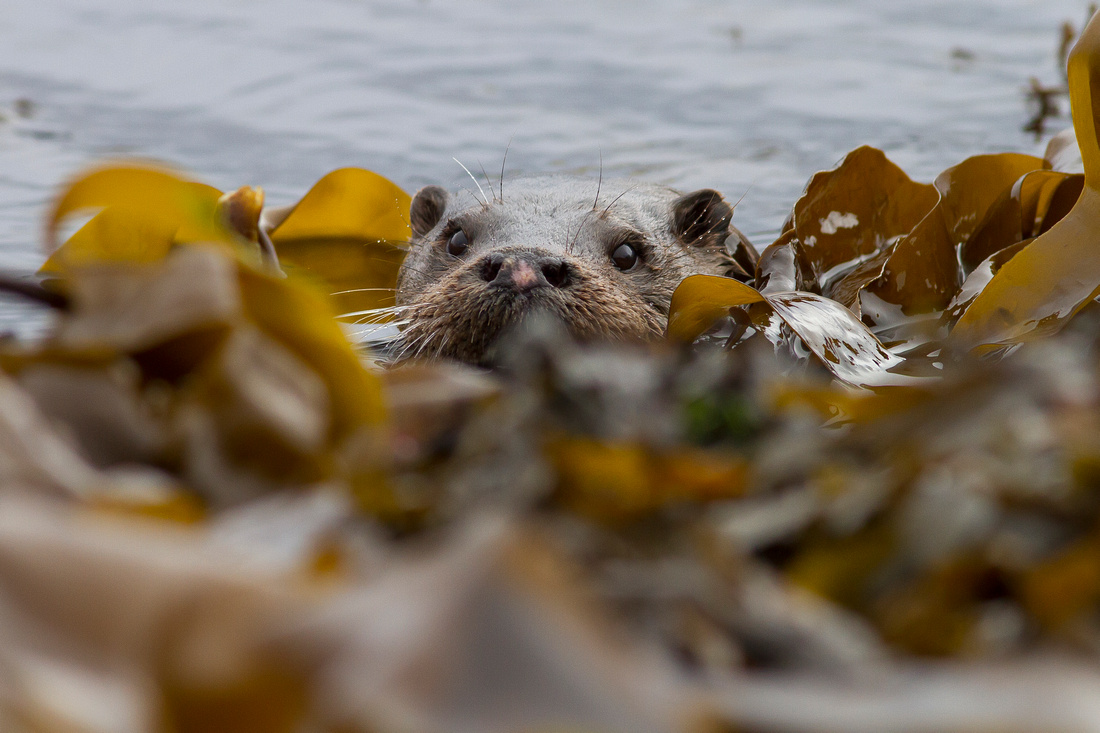 Two and a half hours later, memory cards filled and with many fond memories I decided to leave this beautiful creature in peace and return to the warmth and comfort of the car, a little bit smelly, soaked to the skin but still wearing a huge grin.

Me Photographing the otter.