Waxwings In The Garden!

Waxwings in the Garden! 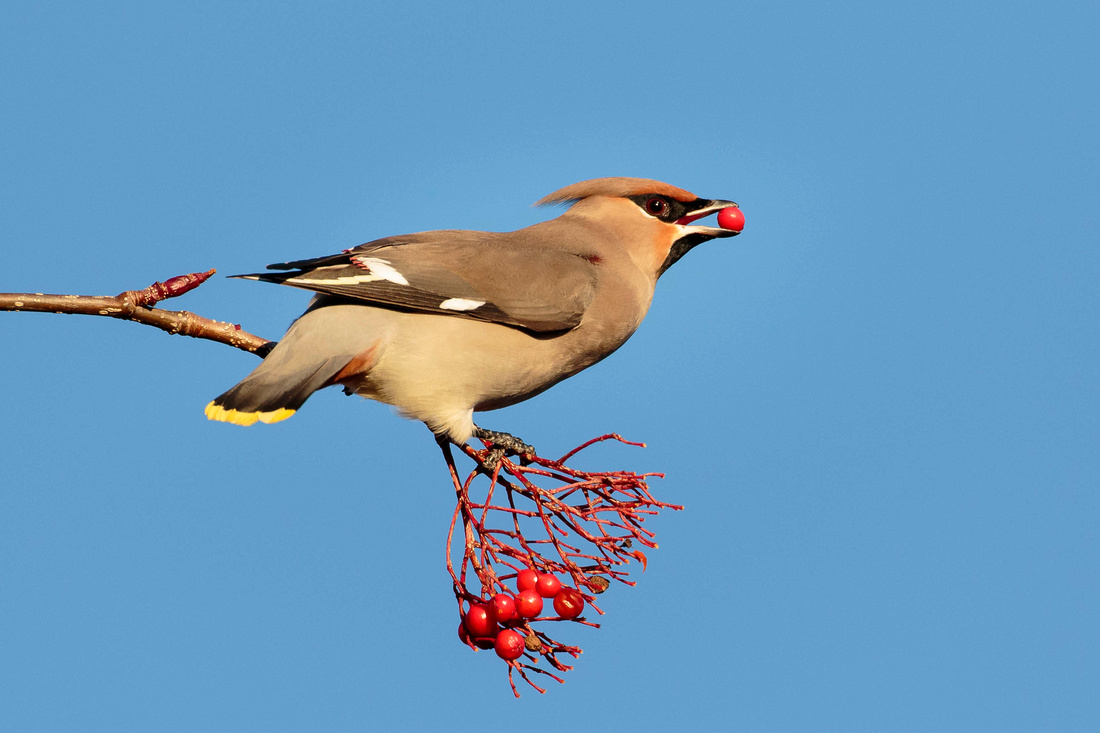 The third of December dawned like any other day, if there is such a thing for a pro-wildlife photographer! A friend of mine was staying with us that week and we had decided to take advantage of a weather window to pay a visit to the ptarmigan in the Cairngorms.

Later that same day whilst in the process of photographing a ptarmigan my mobile phone started to ring but I chose to ignore it as I was kind of busy (ptarmigan are rather important you know!) After I’d finished the business in hand I checked to see who had called, and it was ‘the Mrs’ so of course I immediately called her back. “Guess what we’ve got in the garden?” she asked. Now over the years we’ve had some exotic and exciting avian visitors to our garden, Crossbills, Woodcock, Barn and Tawny owls to name but a few so nothing really surprises me anymore. ‘Waxwings” was excitedly yelled down the phone, “How many?” I enquired, “Hundreds” Lyndsey screamed. “Close enough for a photo?” I asked, ‘Yep, and they’re really tame” came the reply.

Although I was a tad jealous I was really pleased for Lyndsey, as in the past month I’d spent quite a bit of time photographing Waxwings, I’d even had a decent run of my images published in the national press, so I couldn’t really complain.

On returning home I was shown amazing Waxwing images with clean and uncluttered backgrounds. On asking Lyndsey how she managed that? She casually said, “I moved the car into a good position, opened the panoramic sunroof and put my tripod on the roof to give me more height!” We spent the evening talking about how cool it was that we’d had them visiting our garden and wondered if they would return?

I awoke on Sunday morning, drew back back the curtains and was greeted by a flock of Waxwings in the tree right outside our bedroom window, a sight I shall never forget! They must have roosted in the trees that surround our home. I ran downstairs and into our backyard, to find that the rowan tree no more than ten metres from our back door was covered in Waxwings! 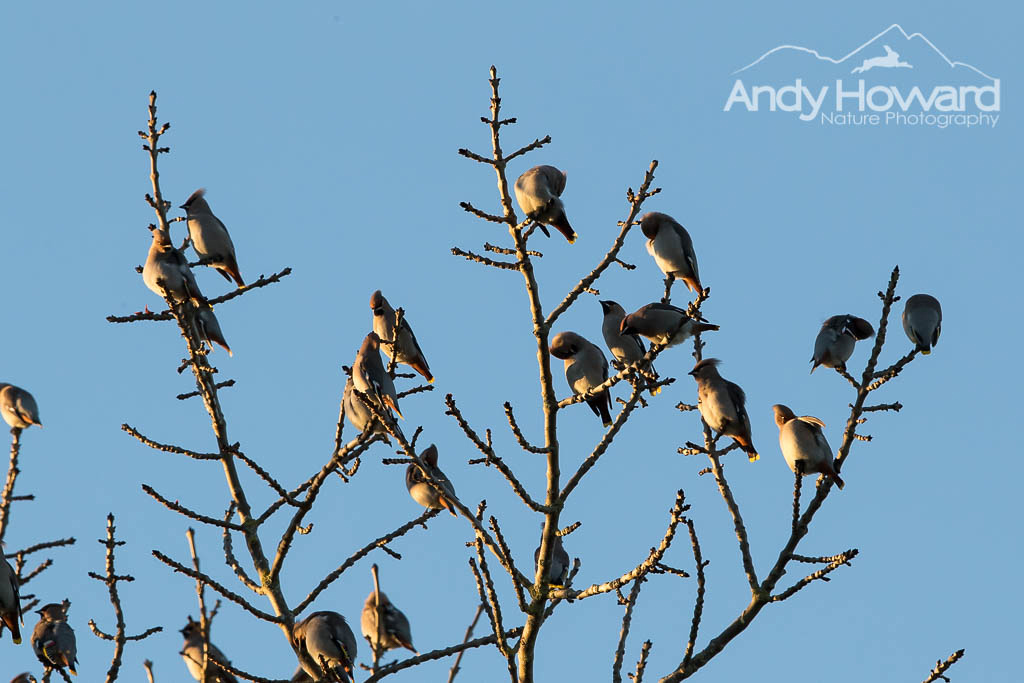 Within minutes we were all dressed, kitted up with cameras, lenses, tripods and were ready for action. The birds behaved as they normally do by sitting in the high tree-tops and then swooping down en-mass, gobbling down berries at the rate of more than one-per-second and then retreating back to the high branches, and this went on all day! 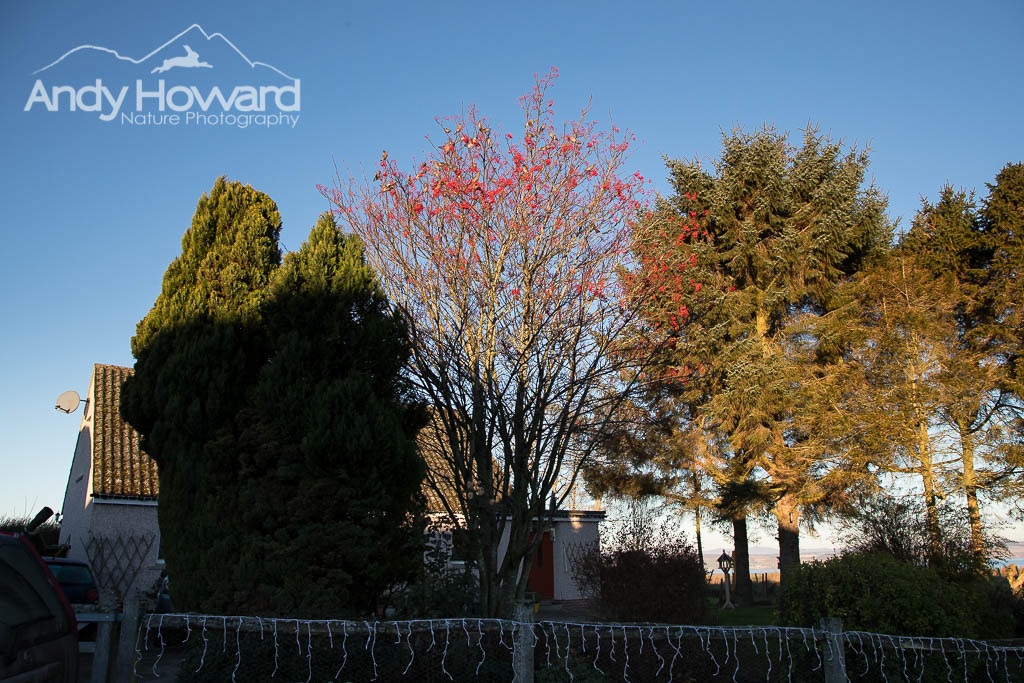 The interesting thing was that as the day progressed they became more and more accustomed to us moving around and getting closer, by the end of the day it was possible to stand just a few metres away from them as they happily gorged themselves on berries. 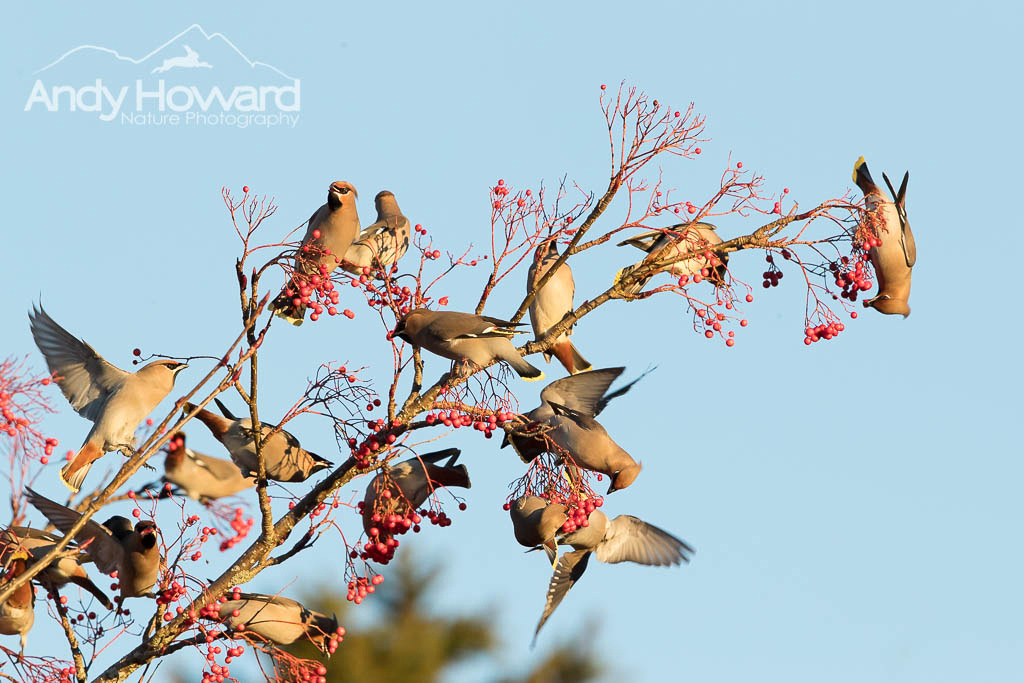 We made a few phone calls whilst we still had berries left and some of our friends that live near by were able to come over and share the experience with us. Many mugs of coffee and biscuits were consumed during the day along with a good helping of friendly banter! 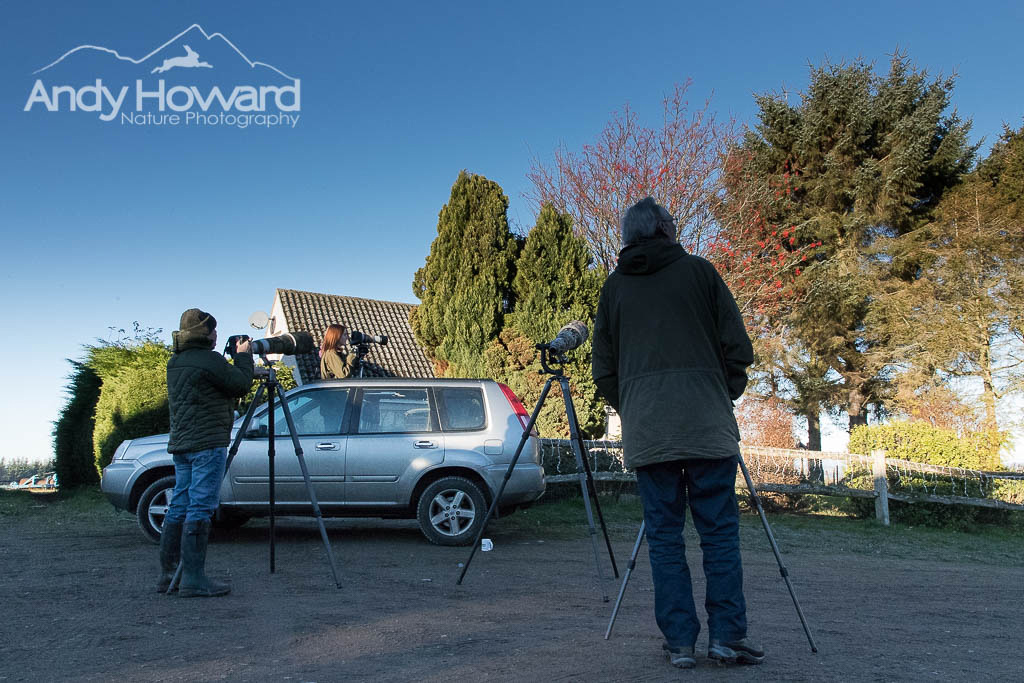 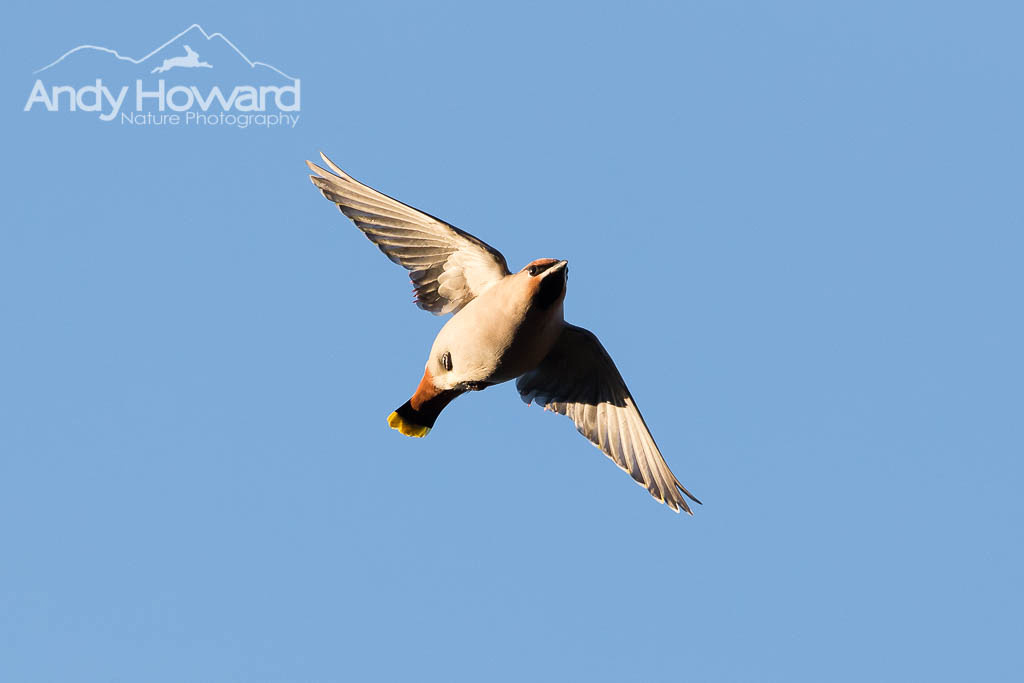 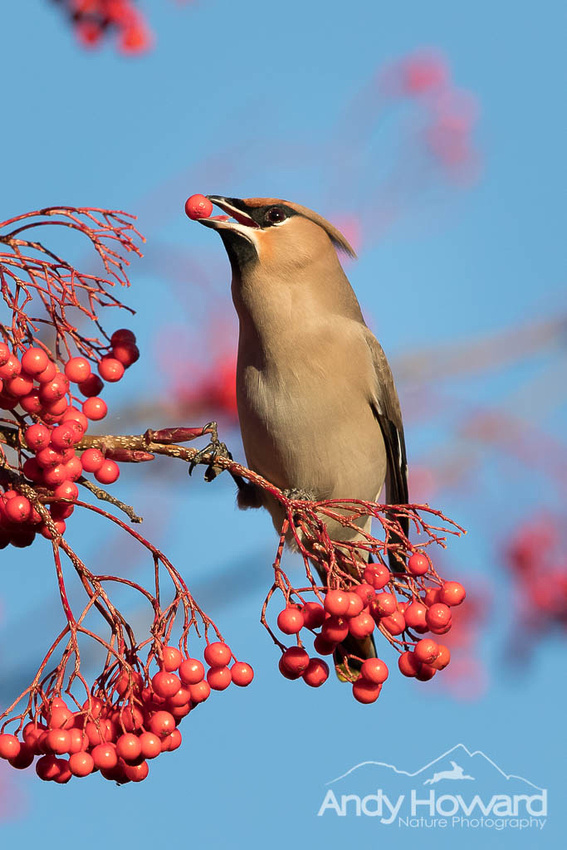 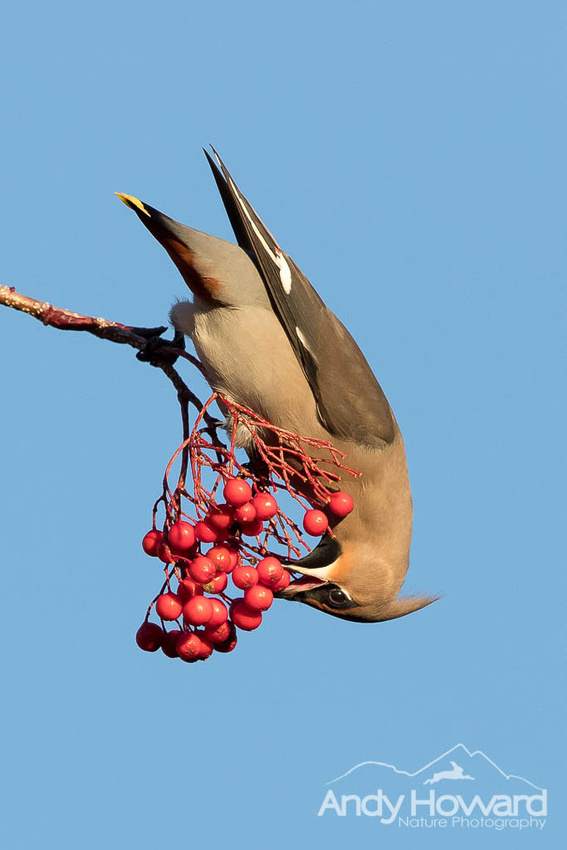 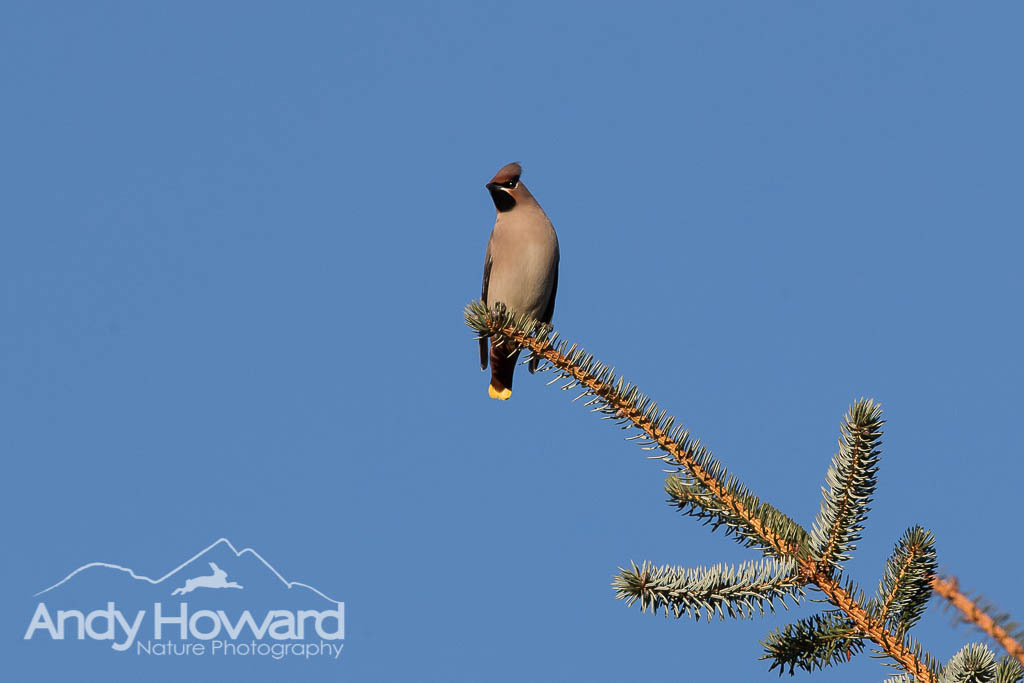 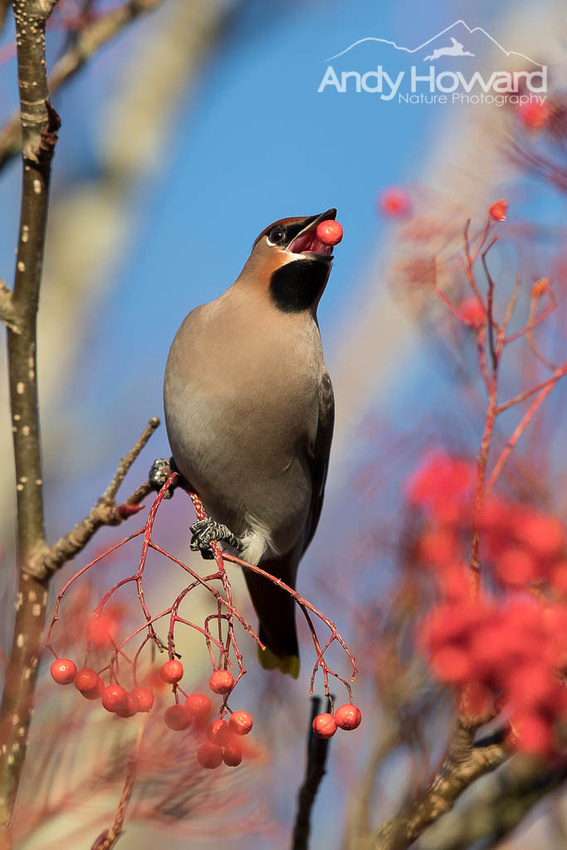 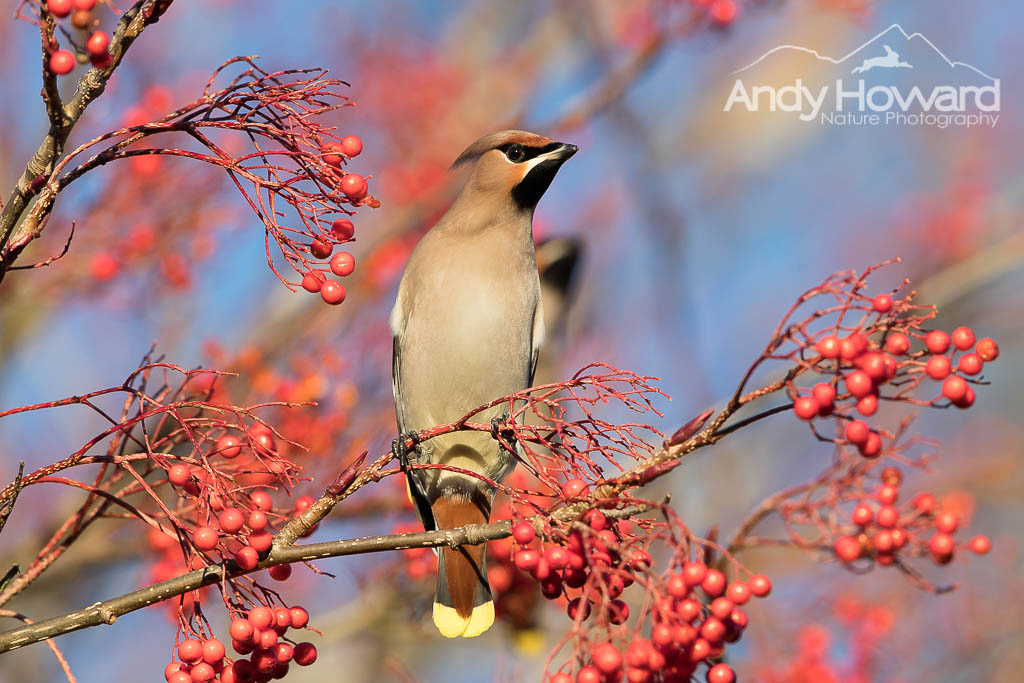 As the afternoon wore on we decided as an insurance policy to skewer some red apples on to deer antlers which we had jammed in our hedge. The Rowan tree by this point was almost completely bare so we were hoping they may switch to apples when the berries ran out.

One thing that I have failed to mention is that a few weeks previous a Mistle Thrush had staked its claim to our Rowan tree as its very own, and until that day it had been aggressively chasing off all manner of birds that dared to land in its sacred tree. Hence why we had so many berries left! 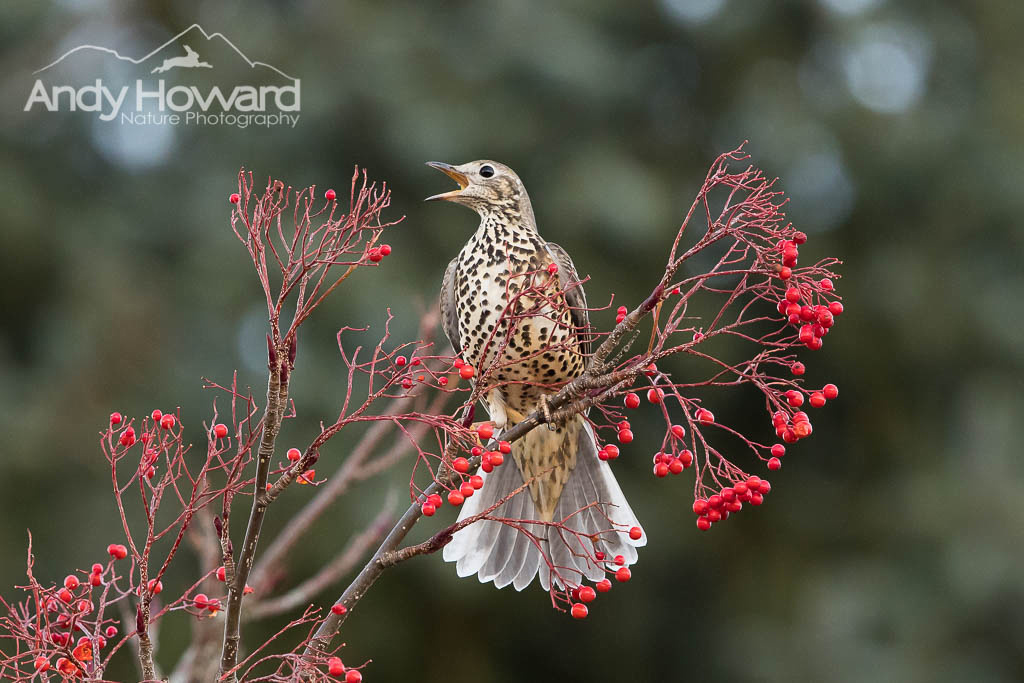 It goes without saying that trying to chase off a couple of hundred waxwings was going to be futile and sadly this proved to be the case. By the end of the day the tree had been stripped bare despite the Mistle Thrush's best efforts to keep the tree intact.

As the light began to fade the majority of the flock moved to a small coppice of trees about 300 metres from the house, so we followed them and watched as they drank from a puddle in a field. They also appeared to be taking frost from the grass, or that’s what it looked like to me; could this be another way for them to take on fluids?

Just as the sun was setting they made one last purge of berries from the garden, and once they'd devoured them they switched to the apples, but only for a brief moment. The flock then retreated to a nearby tree and settled down for the night.

The next morning we were again visited by the Waxwings albeit in progressively smaller numbers, not surprising considering by now there was nothing left for them to eat.

To experience such an amazing phenomenon on your own doorstep was a joy to behold and one that will stay with me forever, and if I ever meet you in person and we get on to this subject, please do shut me up if I go on and on about it! 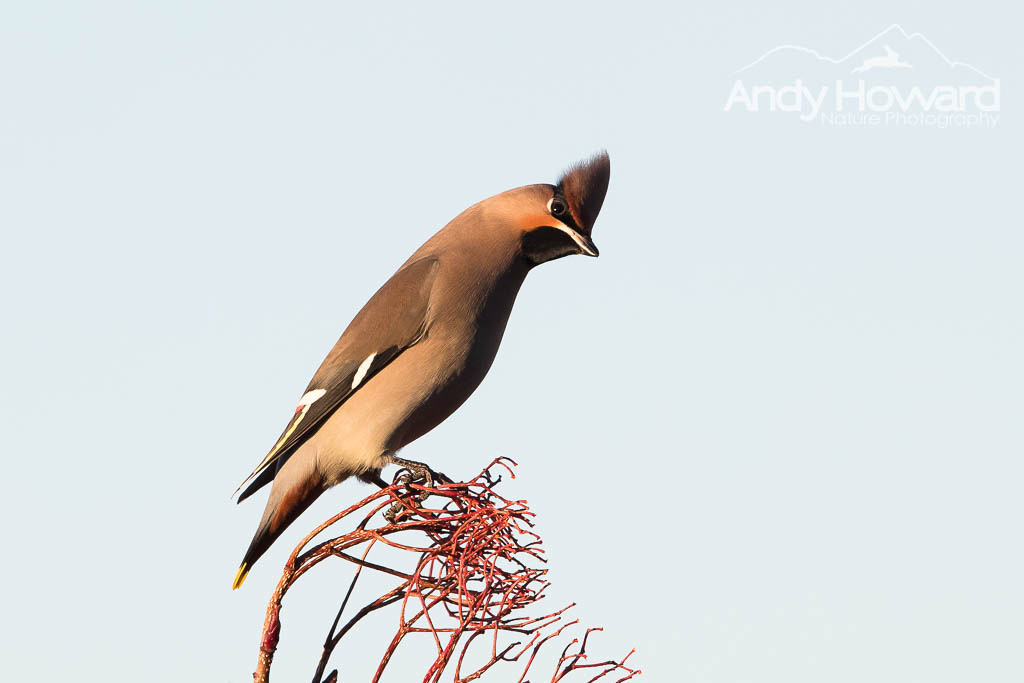