A sad day by the loch side.

Sad Day by the Loch Side

To have any encounter with a wild otter is always special but a close encounter takes it to another level. This morning my good friend Pete and I were out on a pre-Mull Photo Tour recce, and to be honest, the weather was really grotty, rain and a slight off-shore wind made for far from ideal conditions. As we drove along merrily chatting, I spotted an otter walking along the shoreline of a sea loch no more than 50 metres away. Nothing unusual about that, as we have both been visiting this location for years and are now photographing and working with the third and fourth generations of otter families. We quickly deduced that this was one of two possible otters we know along this part of the loch. It later became apparent that it was one of the cubs of a very good mother otter who has two very healthy cubs this year. In fact we had both been photographing this young dog otter since he was about three months old.  During many of our visits to the island during last year we witnessed him growing up to be a strong and ultimately independent sub-adult, and his holt was no more than 150 metres away from where his Mum gave birth and raised him. 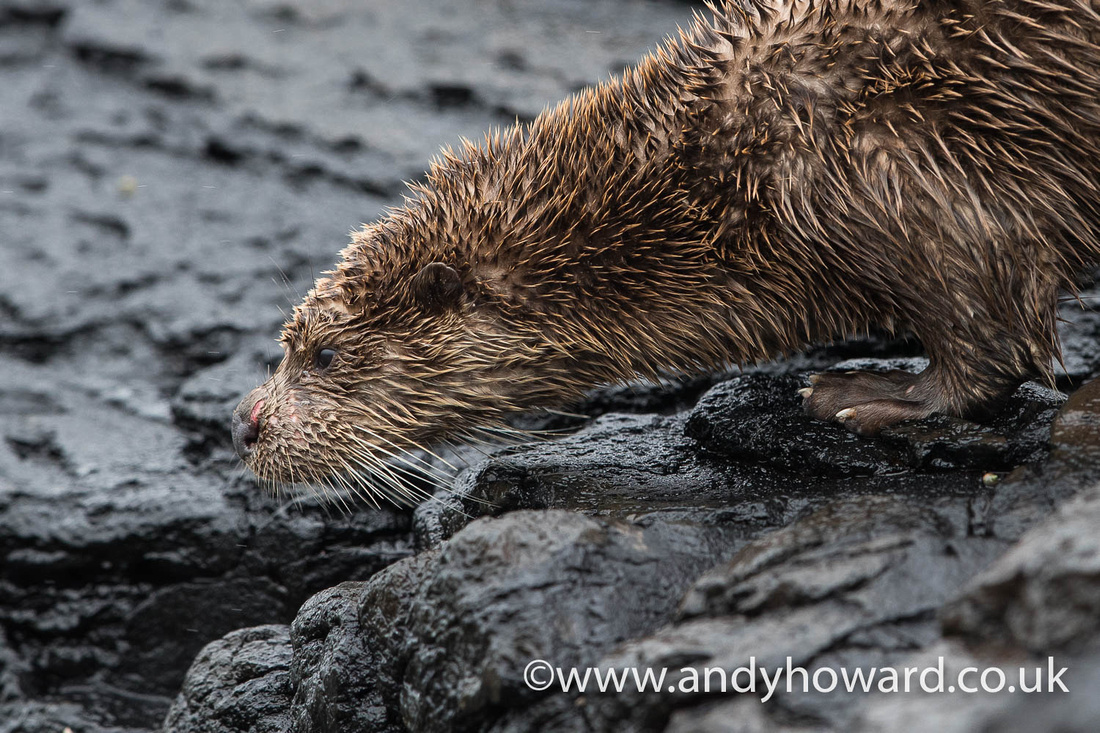 From the comfort of Pete’s car we watched him whilst he fished and the moment he caught something we stealthily moved towards the beach, using some rocks for cover, though what he did next surprised the both of us. He walked straight up the beach towards us, crab in tow. For the next 15 minutes he sat on the beach no more than 20 metres from where Pete and I had concealed ourselves and snapped away as he devoured a swimming crab. After he’d finished he headed straight back out to sea to continue fishing. By now the rain was horrible and the sensible thing to do was to retreat back to the car, where we kept a watchful eye on our wee otter as he tracked along the shore. Half an hour later I’m lying on beach watching the otter heading right towards me, and I mean straight down the barrel, and I’m thinking ‘oh God’ he's going to come right up to me. I had the camera on silent mode so with the sound of the wind whistling by I knew I could continue shooting up until he came really close, as it turned out this ended up being the 4.5 metre minimum focusing distance for my 600mm lens! When it was blatantly obvious he was going to totally ignore me I tucked my head down behind my camera so I could just peek at him without him seeing my face. He approached me so closely I was really afraid he’d get such a fright if he suddenly realised I was a human and it could cause him real distress. This is the last thing I wanted (remember I’ve been lying in seaweed nearly all week whilst guiding for a client), but not to worry as he just sauntered up to where I lay, casually sniffed the leg of my tripod, walked down the side of my body and sniffed my boots! It was only after Pete and I met up afterwards that he relayed this to me, as obviously while this was happening I couldn't move a muscle, so once he was out of my peripheral vision I lost track of him. 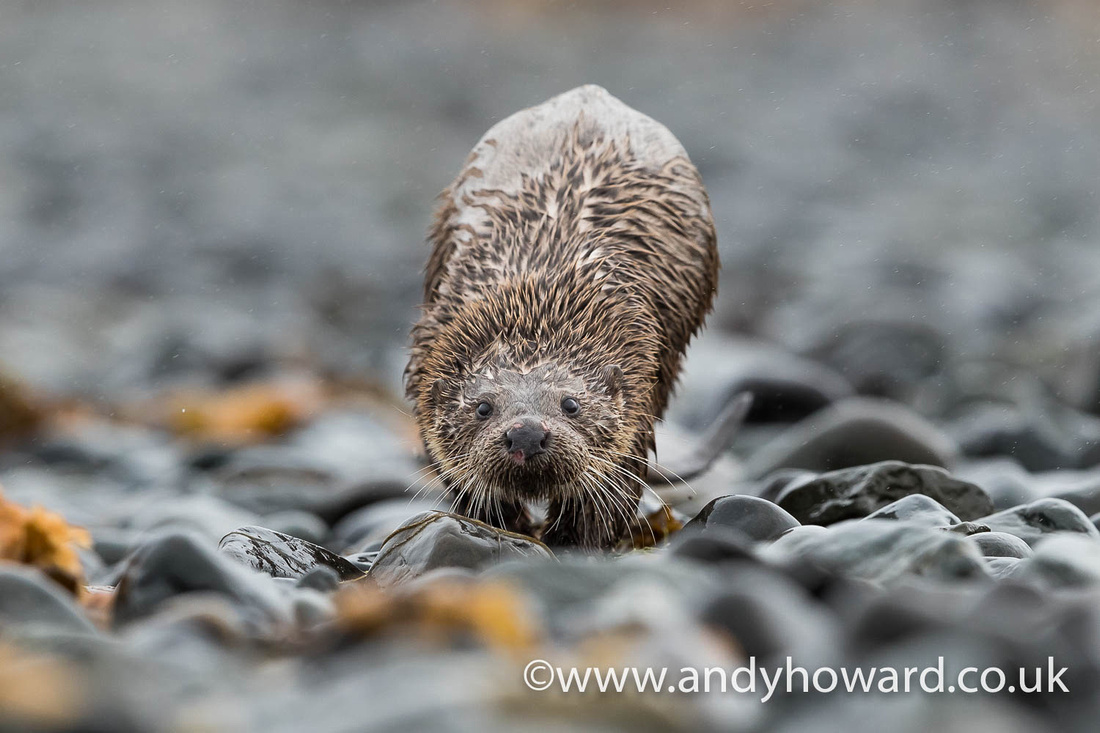 So you’d think after an encounter like this I’d be overjoyed? Well no, I’m not. In fact I’m really quite upset and concerned about it. I’ll explain why.

After photographing and spending as much time as I do with a species you get to know its behaviour and habits, and something about this otter wasn’t right; its mannerisms weren't ‘normal’. Alarm-bells started ringing when he started to eat a dead barrel jellyfish, something I’ve never seen before. 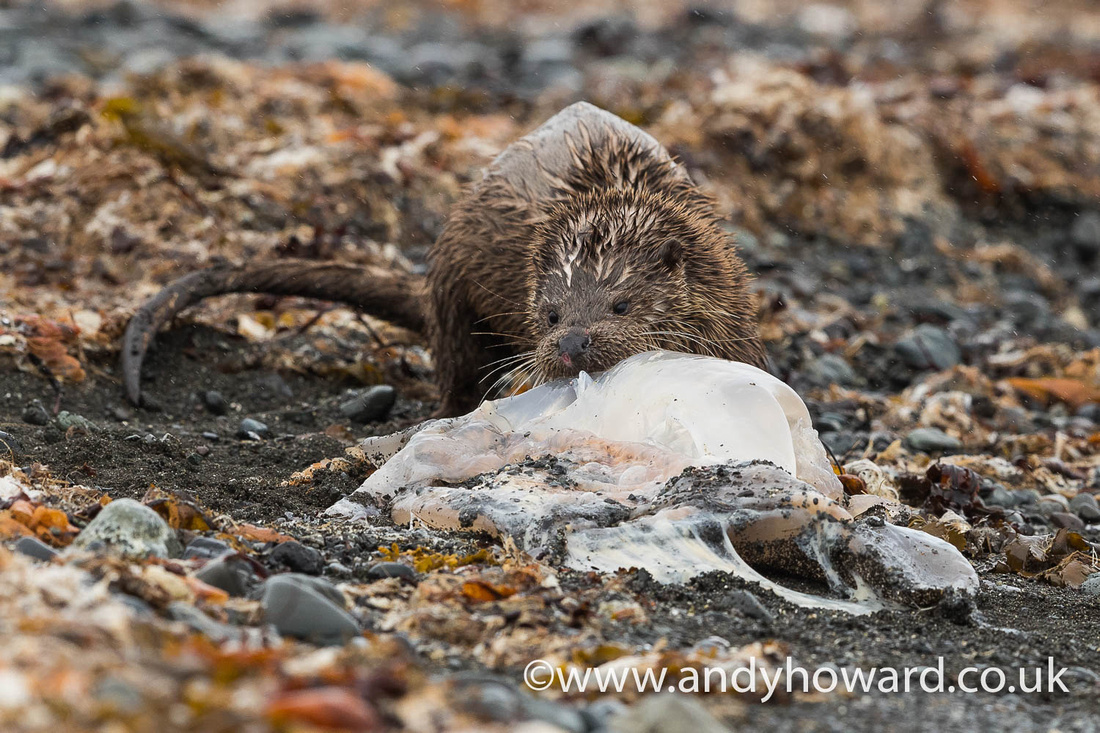 The full extent of what was wrong with this otter would become very apparent to us as we reviewed the images, apart from the obvious scarring on the otter’s nose, which to us looks like the result of a severe bite, it also has a puncture wound on one of its paws, scarring on the neck and what look like maggots in its fur. Another observation we made was the state of its fur, and I can't ever recall seeing the white under-fur on an otter before. Otters are fastidious at keeping their fur clean as it’s this that gives them essential protection and insulation against the cold. It looks like this young otter has had a harsh and potentially fatal encounter with the dominant dog otter on this territory. I know him well and he's a mighty fine specimen, big, strong and in his prime. I’m fairly confident that the injuries sustained by this poor wee otter is a direct result of an altercation with this large dog. Sadly bites to otters are one of the most common causes of death, especially in sub-adult and juvenile otters. So, I wish I had a happy tale to tell you all about this encounter but I fear that this young otter will eventually succumb to it injuries. Nature can be very cruel at times but this allows only the fittest to survive and therefore maintain a strong gene pool and ultimately the strength of the species.

Let’s hope I can share more positive tales with you from the remainder of my time on Mull. 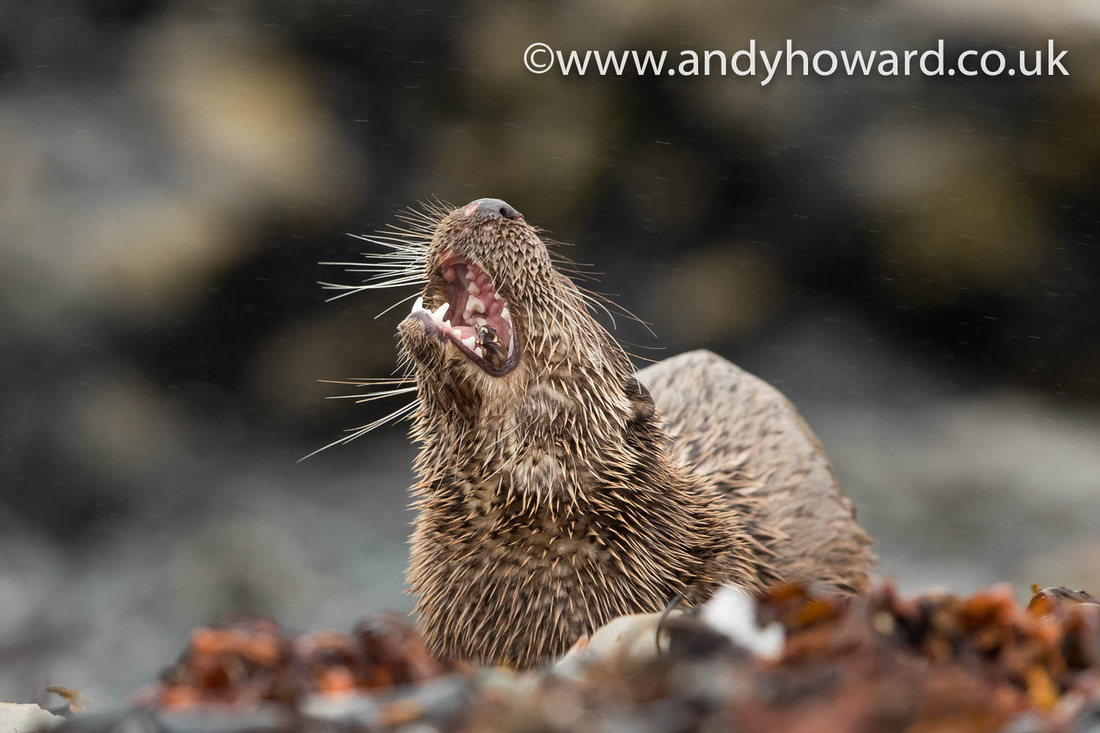 Anthony Scully(non-registered)
Dear Andy, Love the Hare and otter photos. I have just read the feature in the I and am looking forward to reading your book. Please find enclosed a couple of poems that I have written about this wonderful creature. Hope you enjoy them.

Hare – A Sonnet for Louise

Long legged lepus, leaping he careers
Fleet footed on his heels round mad March fields;
Life coursing through his veins, cocking his ears
As the sap of spring rises. His heart yields
To the old ancient impulses of love.
It’s not a buck who beats him back, rebuffs
His amorous advance with a hard glove,
But a pugnacious brown eyed doe who cuffs
Him. Not ready yet, unconvinced, she’ll wait.
Regards him with her cool disdainful eye,
Aloof, testing ‘his’ fitness for a mate.
He, usually nocturnal and so shy,
Makes one last try, knowing he needs to prove
His hare’s heart’s courage - his adamant love.

HARE
I’d never seen across the field a hare
Tear with such fleet foot speed from here to there
A flashing parabolica of blur.

HARE
How strange that looking at the word in capitals
It so resembles its own shape and form.
The ears of H the flat feet of the E
And in between
Lean Torso of the A the long legged R.
Jane Esson. Mull(non-registered)
Hi Andy. What a sad story I can only hope that the wee otter doesn't suffer. After a good start it would be a shame if he was to succumb to a horrible death. Every otter is very precious. We were on the boat with Martyn today great sightings of the white tales.Maybe see you sometime
No comments posted.
Loading...
Subscribe
RSS
Recent Posts
Winter 21/22 in Review Cano R6 & RF 100 -500mm 4.5-7.1 L IS Field Test Why I love my Leica's A sad day by the loch side. New Keela Clothing Blog It's a case of Otter Karma. Waxwings In The Garden! Tamron 150-600mm f5-6.3 Di VC USD G2 Field Test Keela Clothing Blog Orca in Caithness
Keywords
photography wildlife Scotland nature Cairngorm highland Cairngorms blog ptarmigan Guiding
Archive
January February March April May June July August September October November December
© Andy Howard - All Rights Reserved
User Agreement
Cancel
Continue