It's a case of Otter Karma.

It's a case of Otter karma!

Here at Chez Howard things have been an extremely hectic since December with tours, workshops, photography, processing, planning trips to Canada, the list goes on and on. And as a result my blogging has really suffered, in fact it’s become almost non-existent but from here on in that changes!

I’ve just returned from a flying three day visit to my favourite Hebridean island, two days of guiding plus a visit to the family home to have a catch up. As I arrived on the island I thought I may as well check out one of my quiet ‘secret’ wee corners to to see if there were any otters around. The first scan of the bay with my bins revealed nothing, but then I noticed a gull standing on the shore looking expectantly towards a rock, and a further scan revealed an Otter on the shore. As always the first thing I always do in this situation is to stay put, and I observed its behaviour from afar. Moments later it returned to the sea to fish, and this gave me time to gear up and make my way to the shoreline.

Picking the correct spot to await the return of a Otter to shore is a bit of a lottery, but with experience you do get better at this. I positioned myself in front of a large boulder in what I thought would be a likely spot, and sat behind my tripod and lens (these help mask the shape of my face to the Otter) and within minutes the Otter had caught a fish and was heading back to shore, back to the same spot he’d been in when I first spotted him. The fish was quite small and was quickly devoured. Off he went again, back out to fish, only this time he tracked along the shore towards where I sat waiting. Almost instantly up he popped with a large crab and headed right towards the shore close to me. Happy days! 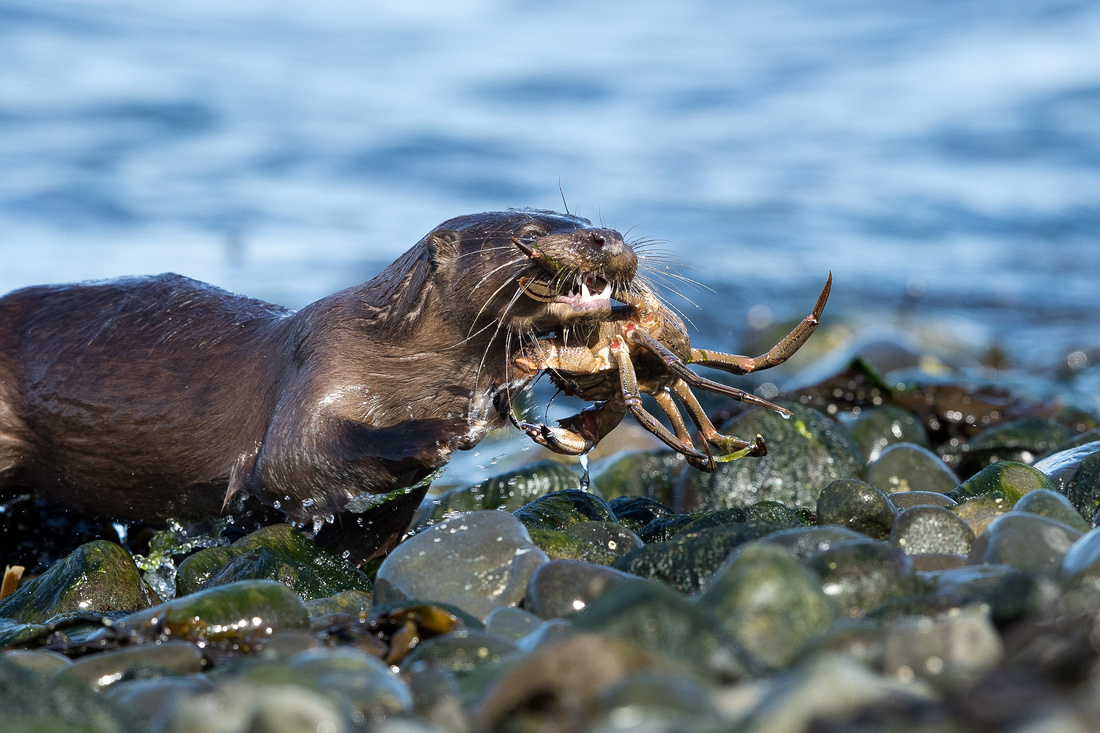 The light was fantastic, bright but not too contrasty as he left the water. I’m not sure what type of crab he’d caught but he seemed to like it.

Lesson one when photographing Otters is never move from your position once the Otter is ashore, as this will nearly always disturb the animal. Stay put and bide your time, Otters will reward the more patient photographers out there! Wait for it to return to the water and only move when it’s diving.

After he’d eaten his crab he once again headed out to resume his fishing, and I watched him as he caught numerous smaller fish and ate them in the water, sometimes holding them in his paws whilst spinning around. It didn’t take long for him to catch another fish but this time much larger, and it looked to me like a flat fish. What he did next really surprised me, as he took the fish back to his holt about five hundred metres from where I was. I’ve never seen or known an Otter to do this before. We live and learn! 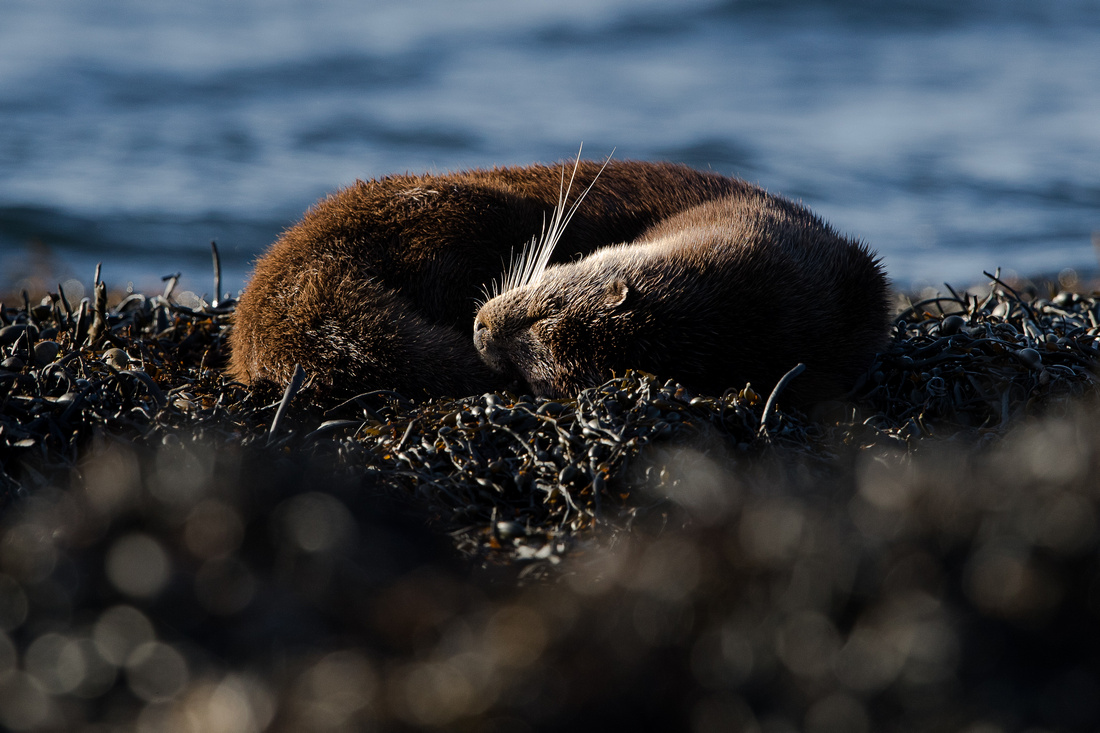 The next day, on my first day of guiding we had a nice encounter with another young dog Otter. At one point as he was ‘crabbing’ in and amongst the seaweed he popped his head up and looked straight towards us, only for a second or two before returning to his quest for food. He eventually passed by us to within a few metres not knowing we were there lying in the weed holding our breath in case he saw or heard us. My client couldn't believe he had come so close to us without knowing we were there. 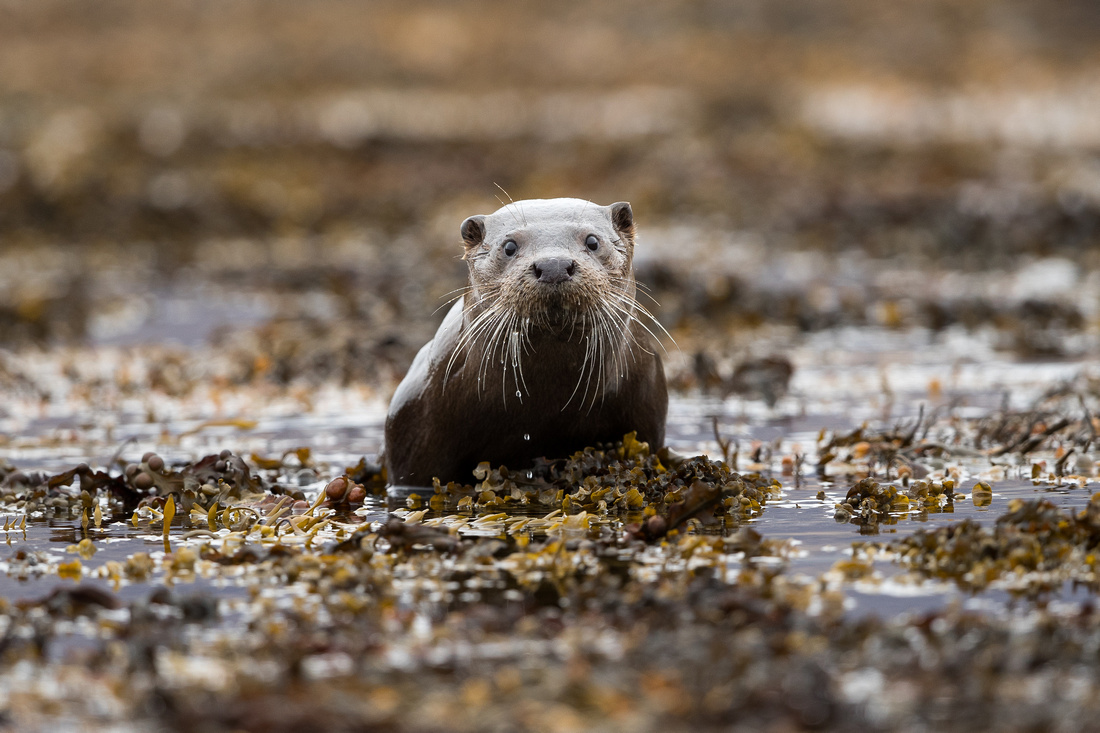 The second day dawned dark and wet and whilst going to pick up my client I thought it could well be a bit of a damp squib, and a real challenge to keep us and our gear dry. I’m pleased to report that as the skies lightened, so did the weather and as the day went on, it got better and better.

It didn’t take us long to find a single Otter fishing quite far off shore. Whilst we were in the process of kitting up, we lost sight of the Otter, and this normally means it’s come ashore, which is exactly what it had done. It was quickly located in the margins in and amongst the seaweed, and we patiently watched it as it foraged, occasionally catching a small fish or crab. This type of behaviour is very typical of a young animal as it’s an easy option and an effective way to fuel up on some protein. Our patience was eventually rewarded when he headed back to sea. This time it looked as if he was heading parallel to the shore. Otters often do this when they’re heading back to their holt and I feared this may be the case. Luckily for us he decided to stop and continue fishing, albeit a hundred metres or so away from our position. We decided to re-position and find a ‘comfy’ spot to sit and wait. We sat in front of a dark coloured rocky outcrop, as this helped to camouflage us. I jokingly said to my client “See that pile of seaweed in front of us? That’s the perfect spot for him to sit in front of us and scoff a large fish”. Well guess what? Yep, you’ve guessed it he caught a decent sized fish (this later transpired to be a Three Bearded Rockling) and headed right toward the very same spot. At first he sat with his back to us but suddenly the fish broke free and made a bid for freedom. It was quickly re-caught and this time the wee darling sat perfectly facing towards the waiting paparazzi!

Lesson two would be if you ever find yourself this close to an Otter, resist the temptation to photograph it for the first few minutes, let it settle and become comfortable. When you do eventually take your first picture do so on the silent mode and take only one, and if there’s a reaction from the Otter wait a while before you take the next one. Carry on like this and when the Otter shows no reaction to the sound of the shutter, now’s the time to take your pictures. This can take anything from five to thirty minutes depending on the individual Otter. Also remember don't cough, sniff, move or fidget. Do so and you’ve blown it, not only for you but more importantly you will spook the Otter and force it to abandon its catch; not a smart move! 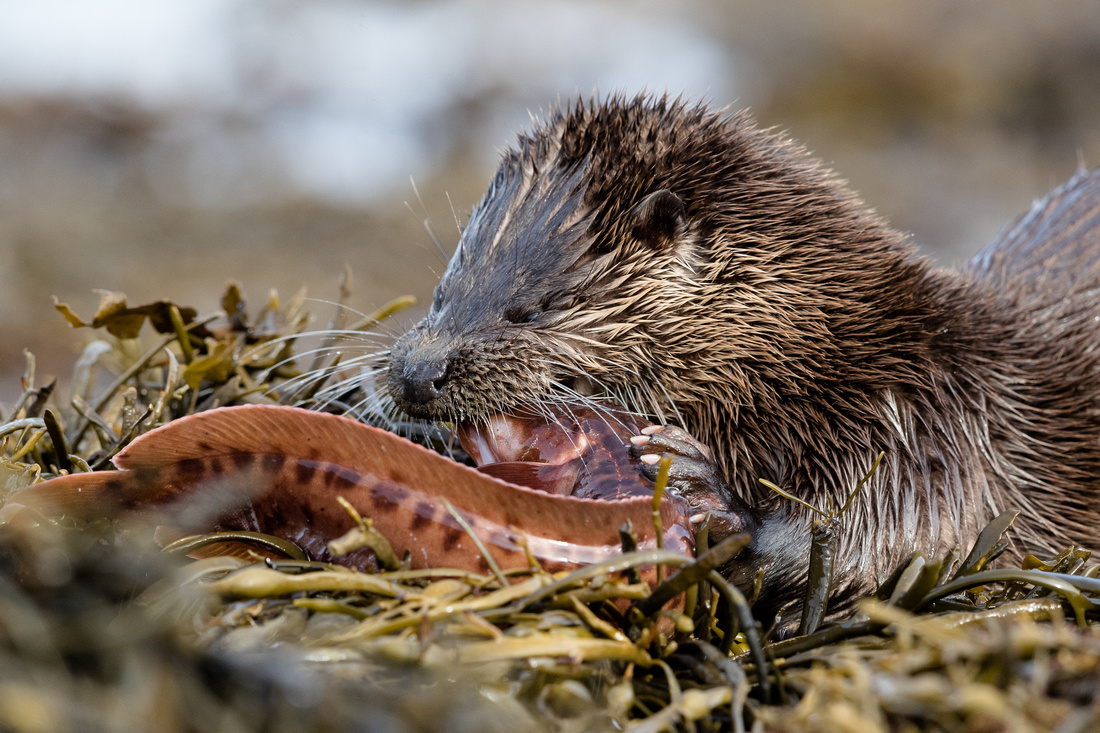 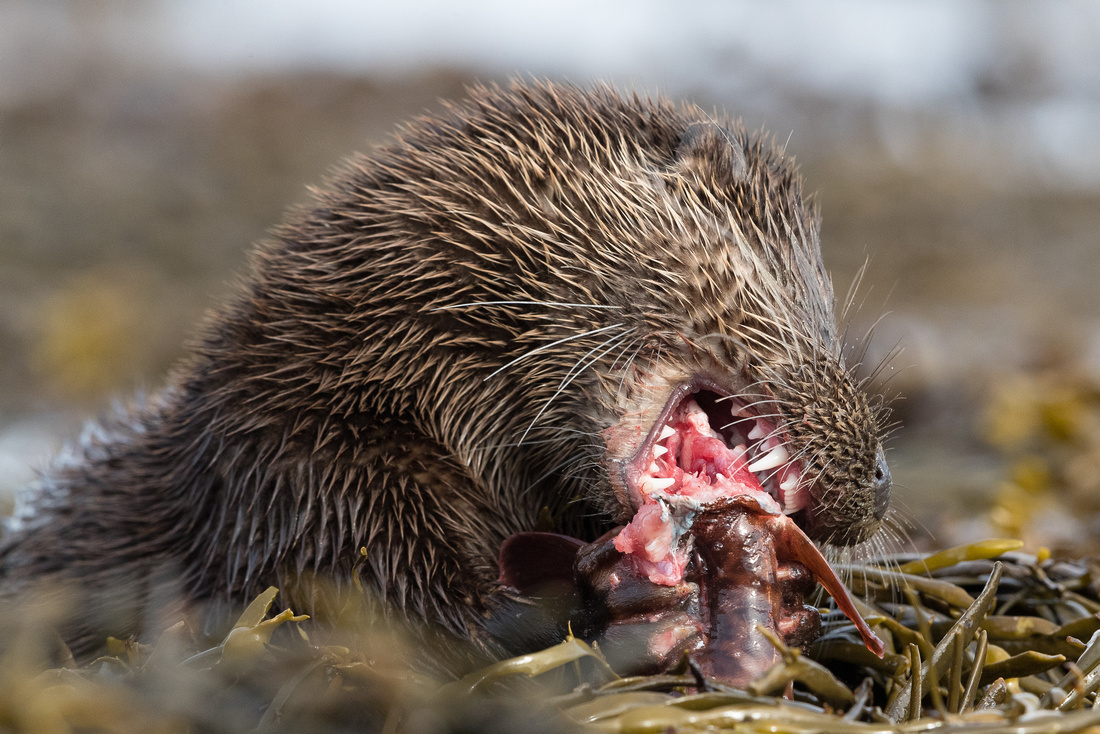 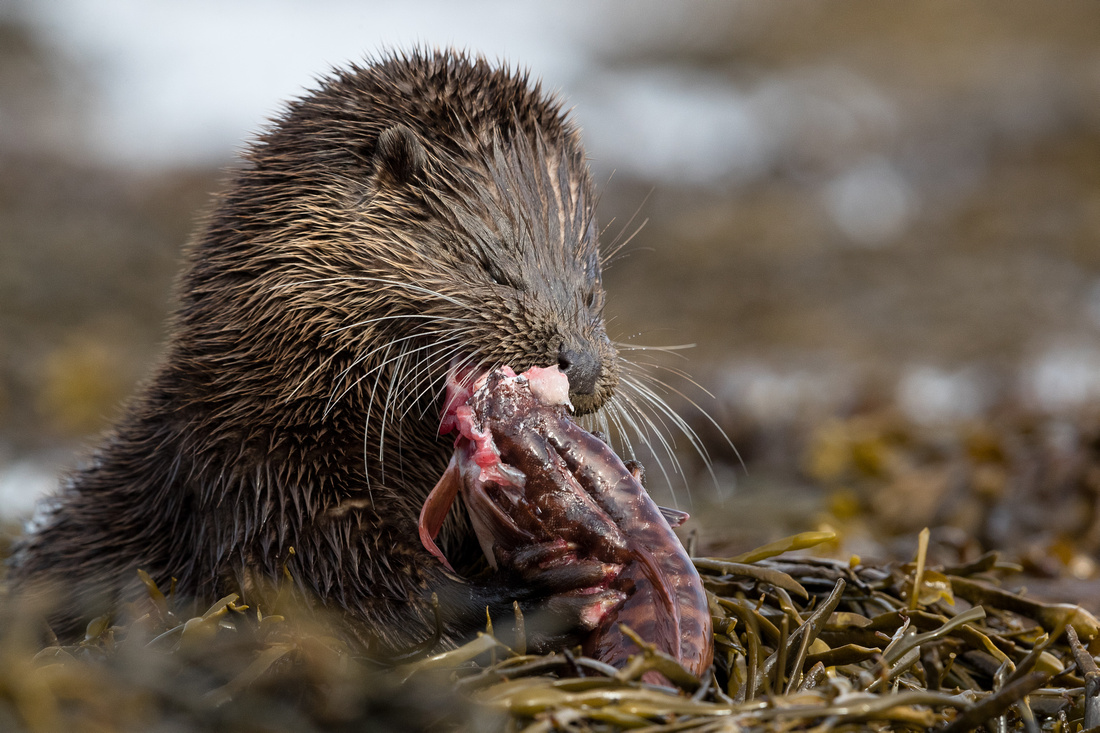 Considering we sat in our position for a full fifty minutes whilst the Otter devoured the fish, it felt more like ten; time flies when you’re ‘in the zone’. Time becomes irrelevant as you are totally absorbed in the spectacle in front of you. One thing that I was acutely aware of was that the tide was slowly creeping up towards us, and eventually we ended up sitting in a pool of water with our boots, socks, trousers and pants all soaking wet. Well worth it I’d say.

Any of you that have been guided by me for Otters will be familiar with a few phrases I talk about, Golden tickets and Otter karma are a couple.

A golden ticket experience is when we have a really good encounter, a close up or to witness a bit of amazing behaviour. These are never guaranteed but do come along with good field craft, patience and an understanding of Otter behaviour, though there is alway a big dollop of luck! 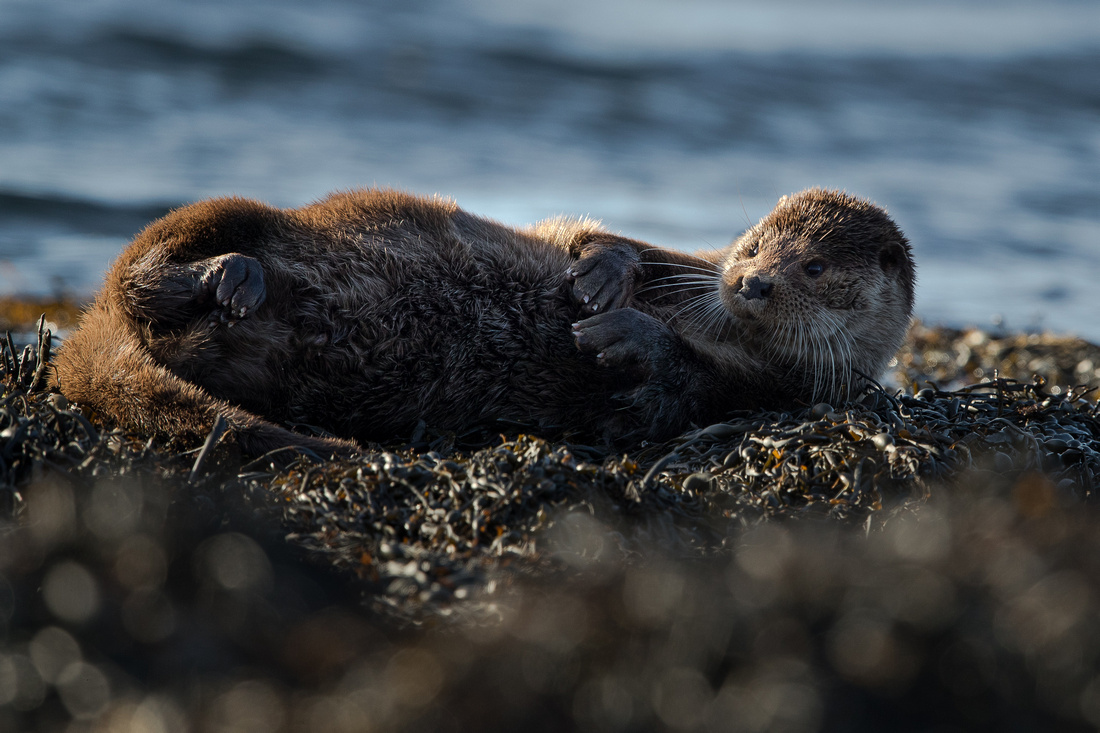 Otter karma is all about respecting the Otters and being relaxed about capturing images. There is nothing worse than being too hasty and desperate to get close. Take your time and be patient. Let the Otters come to you, this may not happen in the next hour, on that day, or even in the next day, but trust me it will happen and when it does you can hold your head up high and say I did it with dignity and good ethics. If you’re in a situation where it just doesn't feel right, for example if you’re not confident the wind direction and it’s not favourable, walk away and leave the otter in peace to do its thing, and just enjoy watching it from afar. Your Otter karma will be rewarded! ;0)

This encounter well and truly ticks both boxes, Otter karma was well and truly restored although I’m not sure this was a ‘golden ticket’ moment, more like a diamond encrusted platinum one!!!! 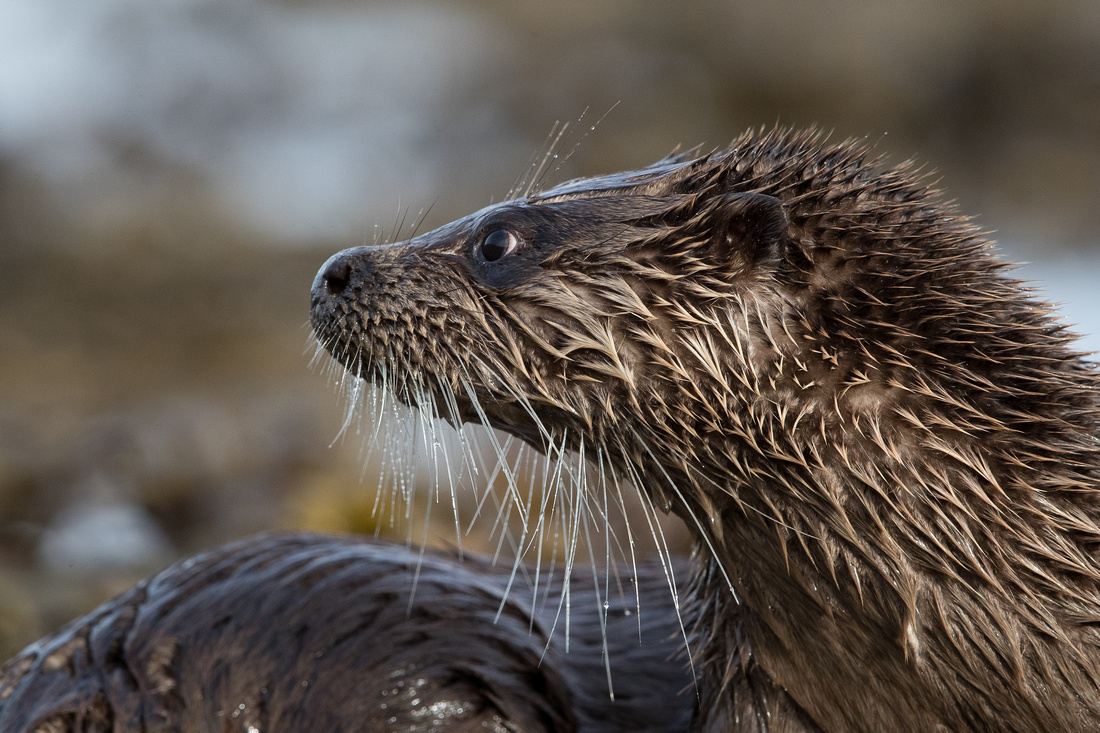