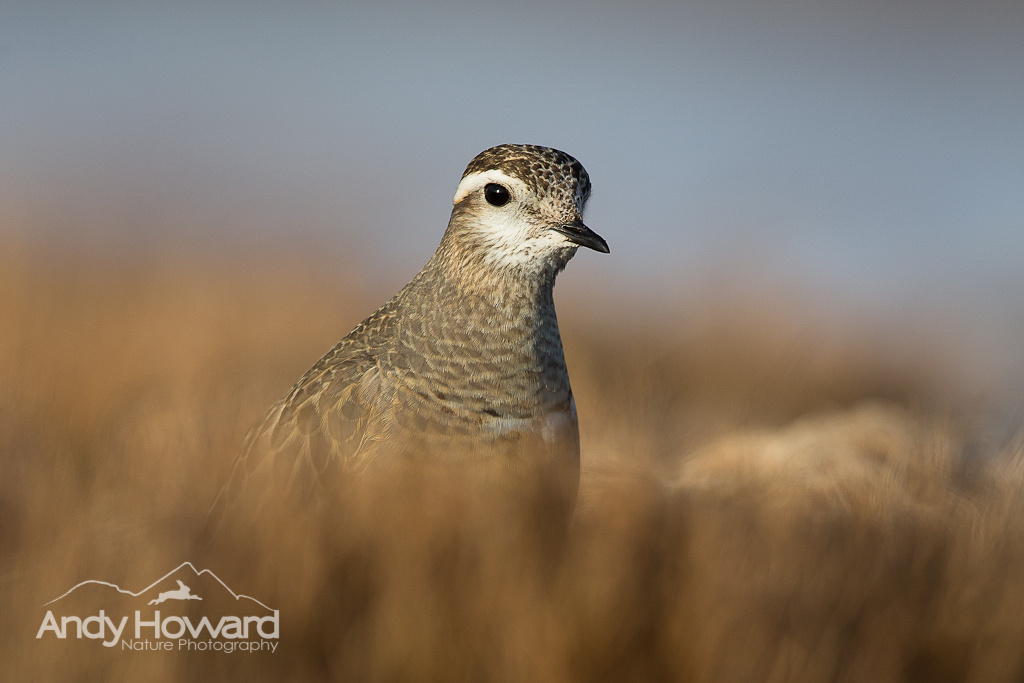 Friday’s weather forecast was for bitterly cold winds slowly easing towards evening. It was with that in mind that my client (Steve) and I decided to start our day later than normal. The trek up to the Cairngorm plateau started at 11am. The walk had literally just started when we were distracted by the antics of a few Ring Ouzels, but we made the difficult decision to press on and continue with our mission to find our first Dotterel of the season. After twenty minutes of walking I was burning up and pouring with sweat (so much for the minus eight degrees wind-chill) so we stopped briefly so I could remove my thermal base layer, a move I came to regret later on in the day.

Laden down with our heavy camera gear we slowly plodded our way up the first of the steep ridges, the temperature seemingly dropping with every step. By the time we stopped for a well-earned rest the wind was gusting to 30-40mph and the wind-chill was now really kicking in. We quickly refuelled with chocolate and resumed our ascent, and as we approached the first of our three potential Dotterel ‘hot spots’ the weather really started to close in, the cloud base dropped and it looked as if the forecasters had got it wrong. I decided the best course of action would be to search the lower areas and then head to the higher ground once the weather improved. After an hour or so of searching our hearts were lifted by the familiar high pitched ‘peeping’ call of a Dotterel. 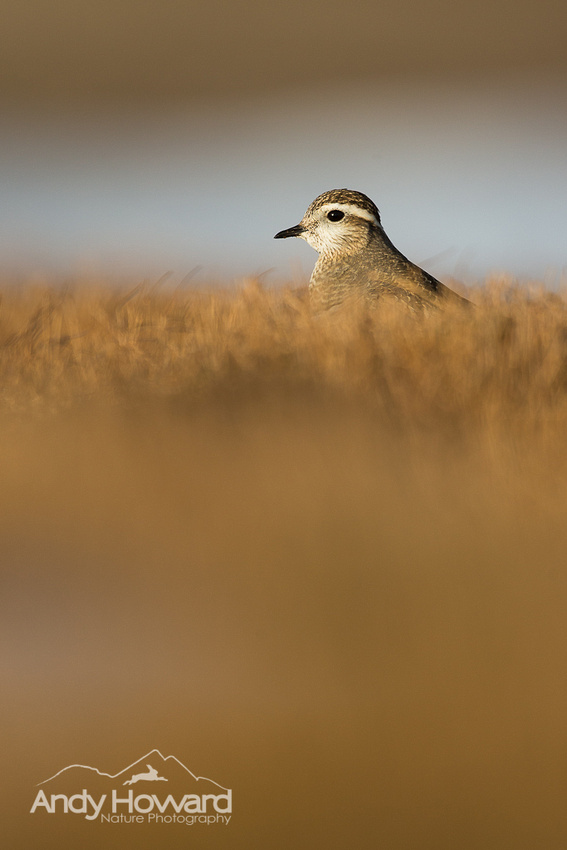 Over the years I’ve found that Dotterel have two distinct behaviour patterns, they’re either flighty or compliant. It’s as simple as that! I’ve also found that the best way to approach them is not to; let them approach you. This is exactly what we did. The male bird was the first to come and investigate what we were, quickly followed by the female. I love the way they scurry across the ground, with their little legs just a blur. As I always shoot at a low perspective this seems to intrigue them even more, especially when they hear the rattle of the camera shutter. The male ran right up to me and stared at me with a rather quizzical look. This is classic Dotterel behaviour. 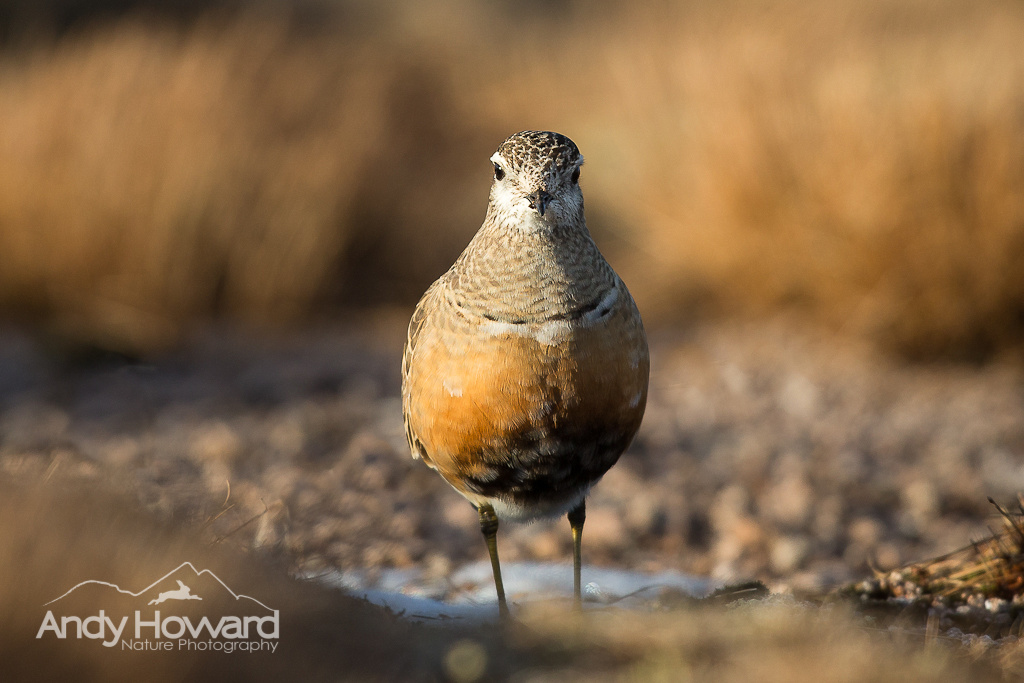 After a short while they decided we weren’t that interesting after all and flew off into the distance. At this point in time the weather was still pretty dodgy and the wind-chill was chilling me to the bone. I even considered putting my thermal back on!

Luckily for us we quickly came across a very relaxed pair of Ptarmigan. As so often happens, at first we only noticed the cock bird, and it was only as I crawled towards him that Steve pointed out to me that the female was sheltering on the leeward side of a rock only a matter of a few feet in front of me, so I made a hasty retreat. 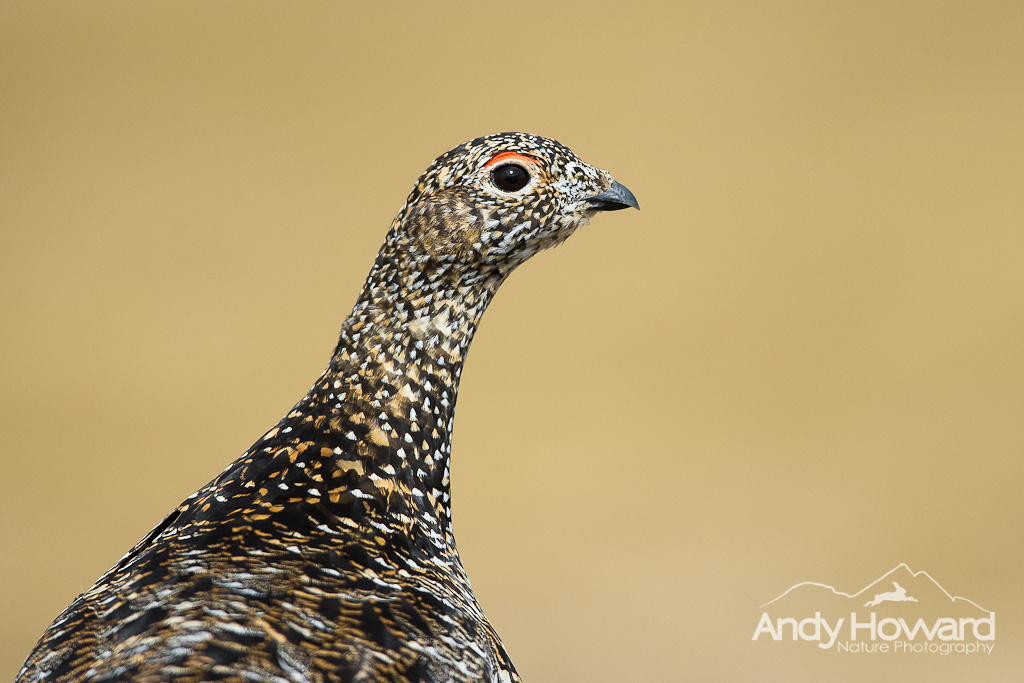 The cock bird then started to lure her towards him with a very soft and delicate high pitched call, hardy audible to us. As they relaxed and started to feed they allowed us to get reasonably close. They then moved into some dead yellow grasses, resulting in the images just coming to life. It’s refreshing to be able capture a different style of image, especially of a species you’ve photographed on many occasions. 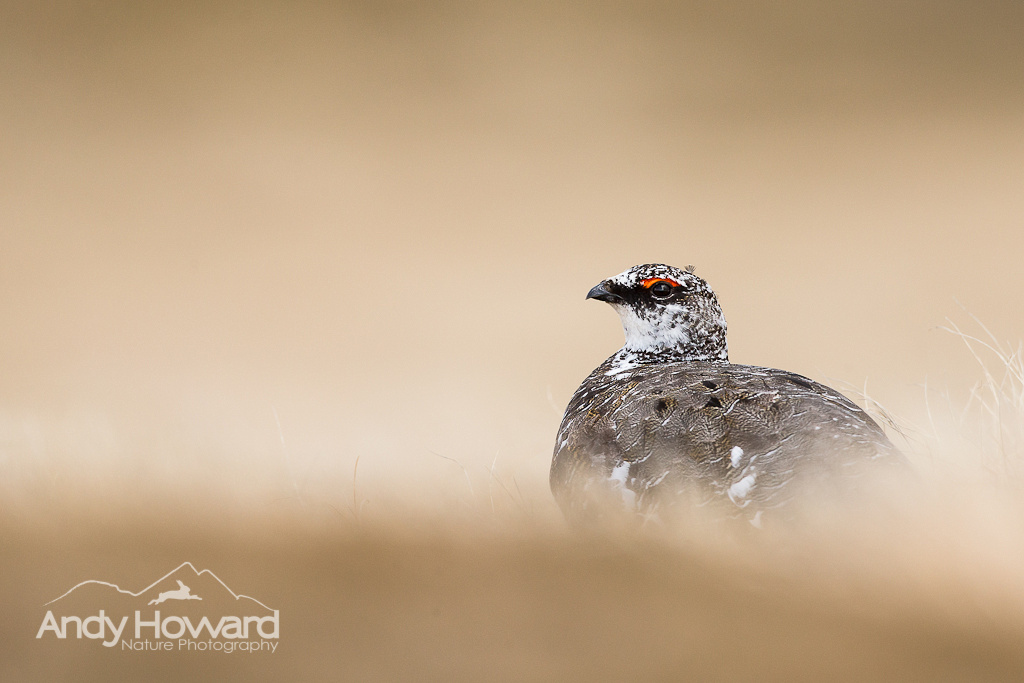 I find it quite baffling why so many wildlife photographers choose to ignore the Ptarmigan when they’re not in their white plumage. Yes they look fabulous when they’re all white and sexy! But in my opinion they look equally as stunning in their perfectly camouflaged summer plumage. 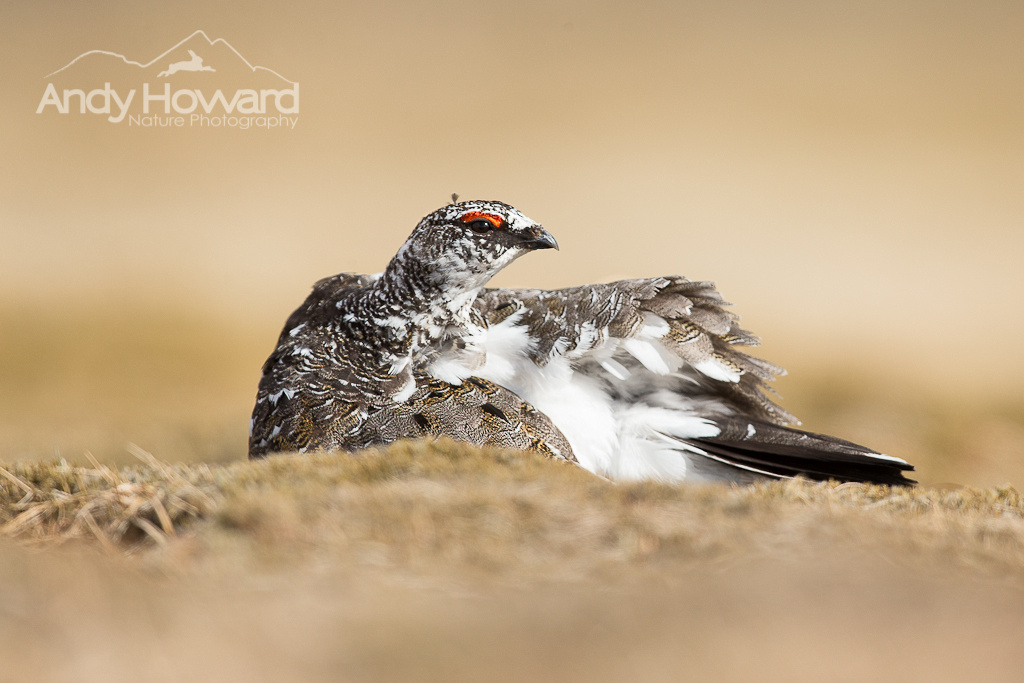 I’m glad to report that by 16:30 the forecast was coming to fruition. I decided that we should make the effort to push for the main plateau.

The Cairngorm plateau is a vast area consisting of approximately 600 square kilometres of upland ground higher than 900m. This area is intersected by deep valleys and corries. So in effect when searching for Dotterel you’re searching for a small 20cm bird in a vast relatively flat and barren landscape. Anyway, shortly after we reached the plateau we found another pair, then another! Sadly these were both of the flighty variety and didn’t even give us an opportunity to photograph them. Steve then noticed another small bird of the wader variety running around, I could hardly believe my eyes, it was a Ringed Plover! I’ve never seen one in this area or as high as this, maybe it had followed the Dotterel whilst on migration? 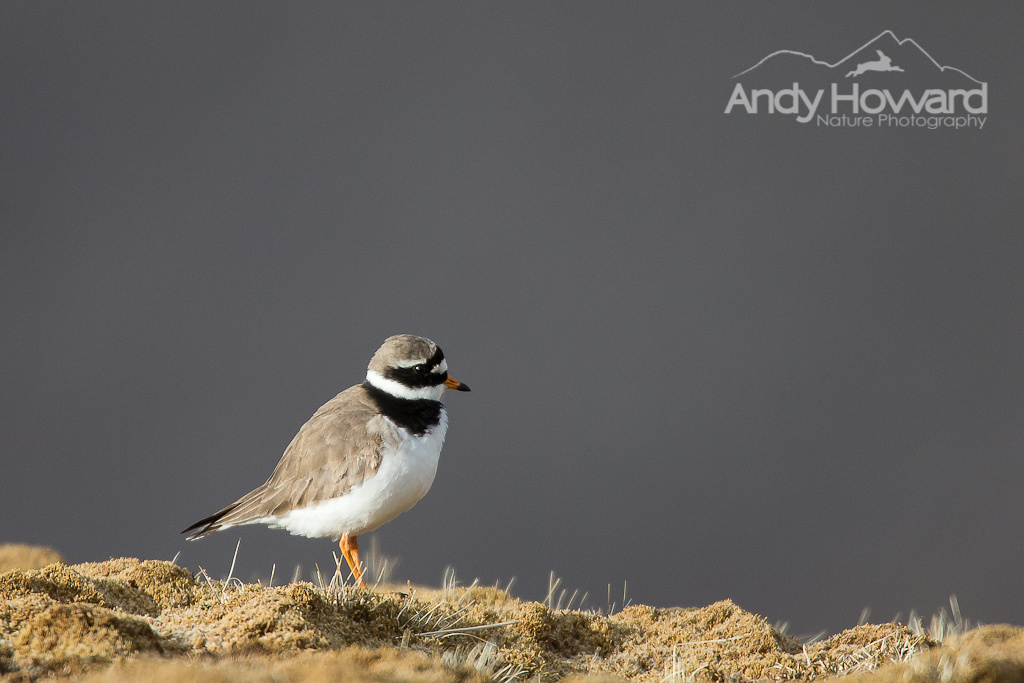 As so often happens, as the evening was drawing in, the best was saved until last. For the remaining two hours we were joined by seven more Dotterel. It looked to me like they were drawn to this particular area for a very good reason. I’m not going to mention that reason here as it’s will give away the exact location, and then none of you will ever book me as a guide!

Steve I were now experiencing Dotterel at their finest. The hills were alive to the sound of camera shutters and the constant ‘peeping’ from the Dotterel. We were surrounded and were rapidly filling our memory cards.The sun by now beginning to dip below the horizon and we reluctantly had to ‘call it a day’. 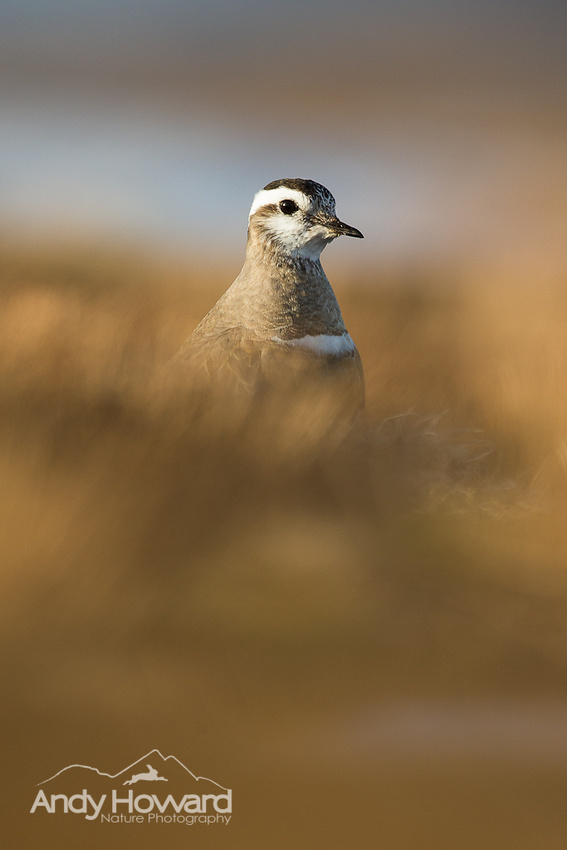 We made the long and arduous descent back to the car park. I must admit that by the time we made it back to our vehicles I was absolutely exhausted. Humping a heavy tripod* with Wimberley head, a 600mm lens and 1DX plus enough food and drink for a full day had really taken its toll.  It was 23:30 when I arrived at home, my body was aching but my mind full of memories from what had turned out to be a wonderful day. That night I slept deeply and soundly, and dreamt of the beautiful and delightful Dotterel.

*I’ve now ordered a light weight wooden tripod from Germany. I’ll write a wee review of it once I’ve tried it.

Rob Cross(non-registered)
A thoroughly enjoyable read Andy, you write as well as you photograph!
Joh6(non-registered)
Great blog Andy, with fantastic photos, I don't think I would make it on to the plateau. So I am happy to see your great photos. I only seen them once over here this year and they were the flitty type so no good photos. Many thanks for your blog and look forward to seeing your report on the wooden tripod. All the best
John
No comments posted.
Loading...
Subscribe
RSS
Recent Posts
Cano R6 & RF 100 -500mm 4.5-7.1 L IS Field Test Why I love my Leica's A sad day by the loch side. New Keela Clothing Blog It's a case of Otter Karma. Waxwings In The Garden! Tamron 150-600mm f5-6.3 Di VC USD G2 Field Test Keela Clothing Blog Orca in Caithness Tamron SP 150-600mm f5.6-f6.3 VC Lens Test
Keywords
photography wildlife Scotland nature Cairngorm highland Cairngorms blog ptarmigan Guiding
Archive
January February March April May June July August September October November December
© Andy Howard - All Rights Reserved
User Agreement
Cancel
Continue