In early March whilst on a trip to England Lyndsey and I met up with our good friend Pete Walkden, it had been decided that whatever the weather we would make the two hour journey from the Midlands to Gigrin Farm in mid-Wales to photograph Red Kites. 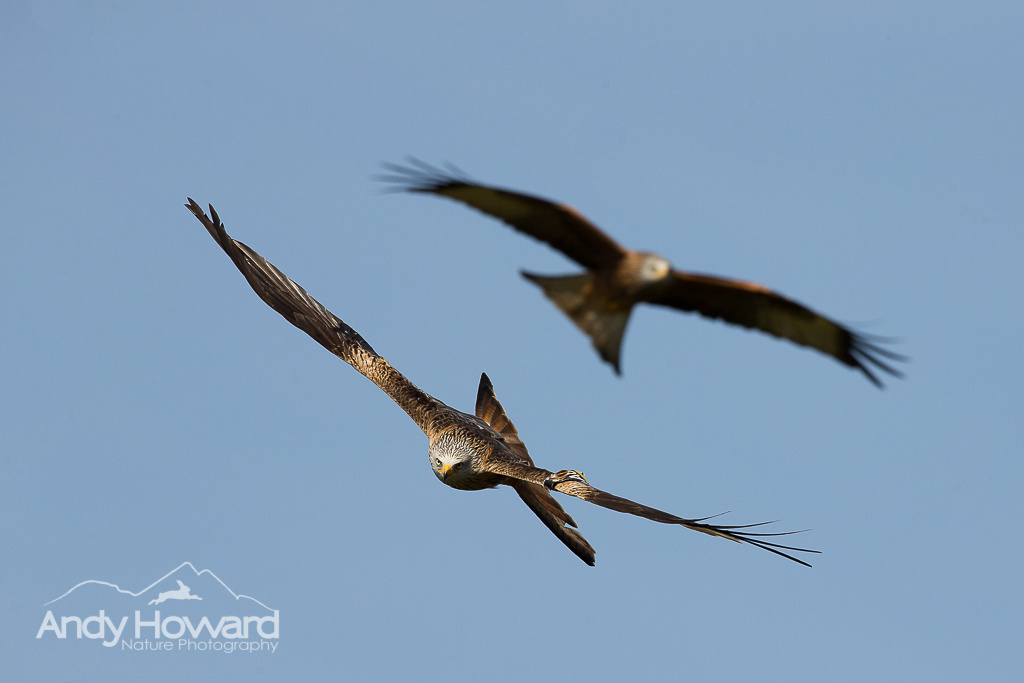 Coincidently as it turned out a rare but welcome high pressure system was dominating the U.K. and was providing us with gloriously clear and settled weather. It had been many years, decades since I'd been to Wales and had forgotten how beautiful it was (mental note to oneself; get back to Wales soon!). It took about two hours to reach Gigrin and as we drew closer we started spotting Kites and Buzzards by the dozen, a refreshing site to see.

The farm sits on a hillside with commanding views over to the Wyr and Elan valleys. In 1992/3 with the encouragement of the R.S.P.B the farm started to establish a Kite feeding station, in the beginning there were only six roosting kites, now there are 300 - 400! Feeding time is at 14:00 GMT (15:00BST) and consists of diced fresh meat spread out in a field by the shovel load!

There are a choice of hide options available depending on what your intentions are, prices start from as little as £5.00 for the basic hides but we opted to pay £20.00 each and take advantage of one of the specialist photography hides. For obvious reasons ours was called the tower hide, this open fronted hide is able to accommodate four photographers with tripods. 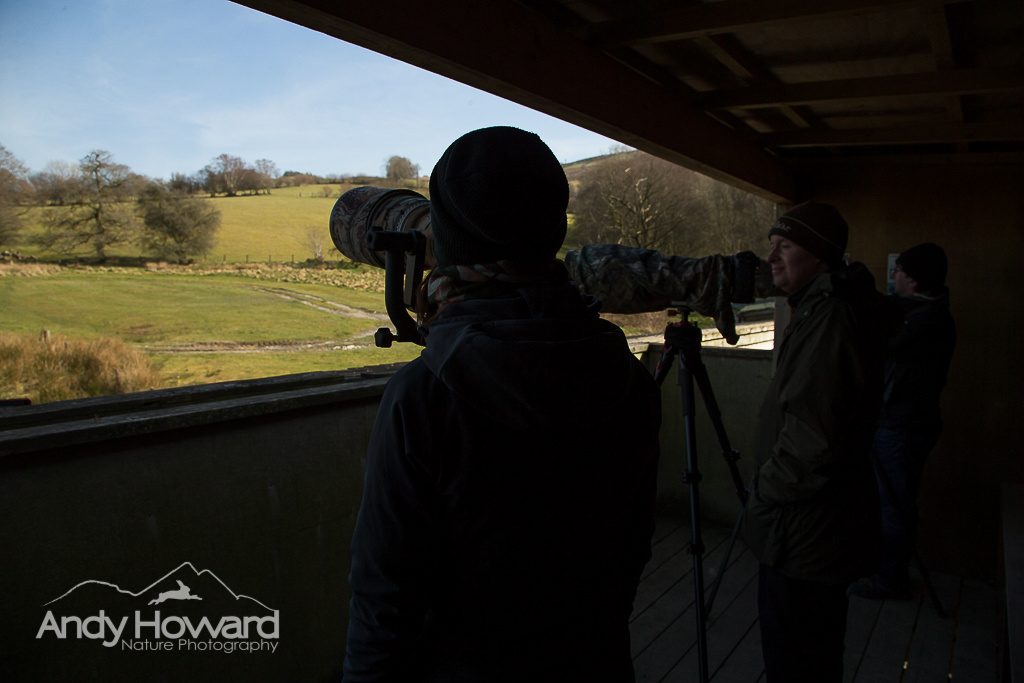 As we were all rather relishing the spectacle about to happen, like children going to a birthday party we arrived long before the action started. Even an hour before feeding time the Kites were gathering, in small groups at first but as time moved on the numbers grew, these birds know the score. At first the more dominant birds chased each other around the skies, the birds lower in the pecking order just chilled out in the surrounding trees.

In the distance we could hear the tractor approaching, we weren’t the only ones, by now the skies were filled by Kites, Buzzards and Crows. I've never seen anything like it in my life and nothing could have prepared us for the sensory overload we were about to witness.

At exactly 2pm the tractor drove onto the small paddock/feeding area, out got the chap with a shovel and spread out maybe ten good shovel loads of the prepared meat, even as he did this the Kites were swooping down and grabbing their lunch. 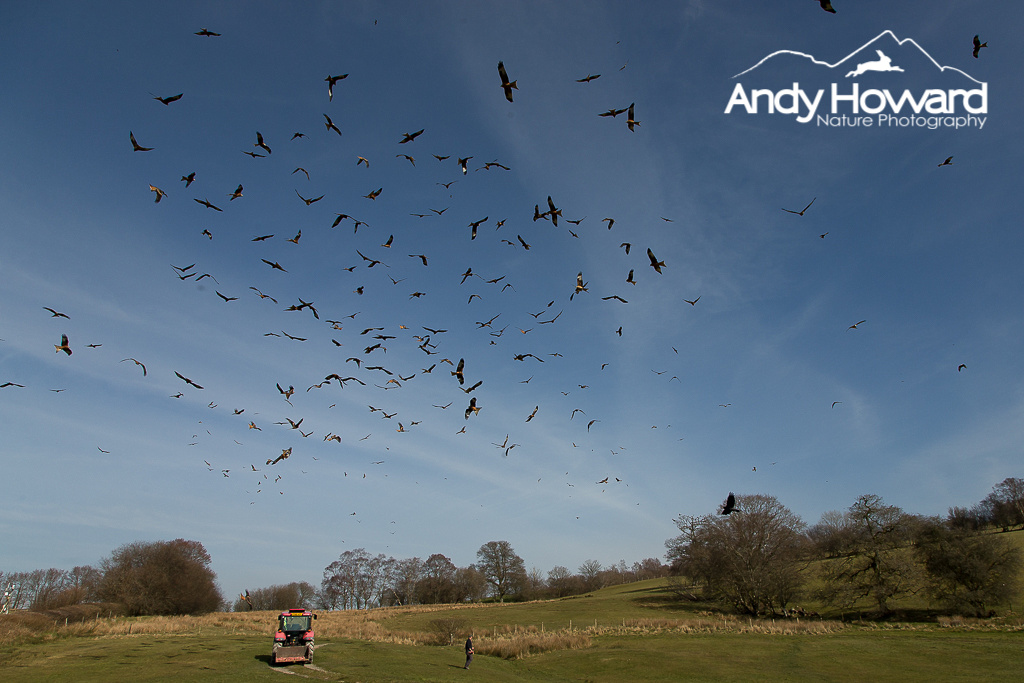 As he disappeared from the paddock all hell broke loose, the sky was literally filled with birds swooping and wheeling in all and every direction, trying to photograph a single bird in this maelstrom would be neigh on impossible. In order to capture the event in the best way I could I started with a 24-105mm wide-angle lens, then switched to a 70-200mm and finally as the frenzy died down a bit I then switched to my trusty 600mm.

The main feeding frenzy lasted for about half an hour and as the more dominant and confident birds had their fill the birds lower in the pecking order came in to feed, this is the best time to use the longer lenses. After doing some online research into the best techniques for photographing Kites, I opted to try and track individuals in flight using the Servo Focus setting on my camera. Also as I most often do I was using manual exposure, ISO and shutter settings, this was made easier by the consistently good light conditions, most of my images were taken on 1600th/sec, f8 at ISO400.

Amusingly the Kites weren’t the only ones that were hungry, at the height of the activity they were joined by a couple of the farm kittens and a few peacocks!

I find that when you're concentrating as hard as we were time really is an irrelevant concept and before we knew it a couple of hours had drifted by. Even after the Kites had moved away to roost we still had great photo opportunities with the Buzzards still in the vicinity, one of us even managed to grab an excellent shot of a Rook in flight! 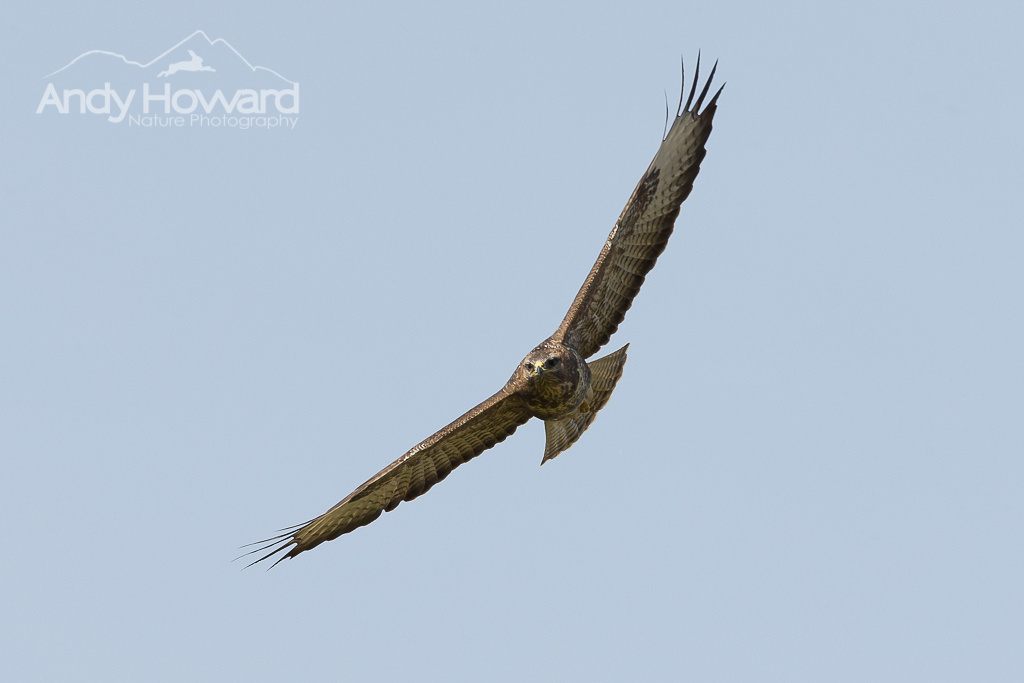 There's no deigning that to see so many Kites feeding at Gigrin is an amazing spectacle, it’s certainly something I can highly recommend and I’m already looking forward to returning.  It did however raise questions in my mind, why we can't have that many Kites in the Highlands? This questioning was ringing in my ears as we drove home continuing to point out Kite, after Kite to each other. 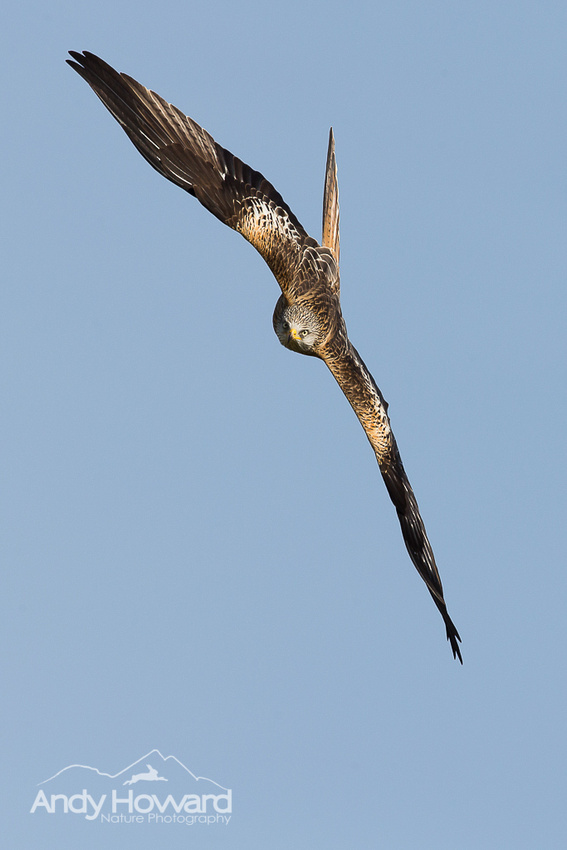