I have confession to share to you, I have a mistress. She can be kind and sharing but on the other hand harsh and unforgiving, yes folks I'm in love with Cairngorm in all her winter finery! Our love affair began in 1982 when I started to ski, for the next two decades depending on her mood we would have an on-off relationship. I prefer her best of all in her thick snowy white coat; this is when we had the greatest fun. Five years ago our relationship changed forever, for she revealed to me a totally new side of her personality, her wild side.

Anyway enough of the silly stuff let’s move onto my review of the 2015/16 winter season!

Please sit back and enjoy this 5 min video before you read the remainder of the blog. 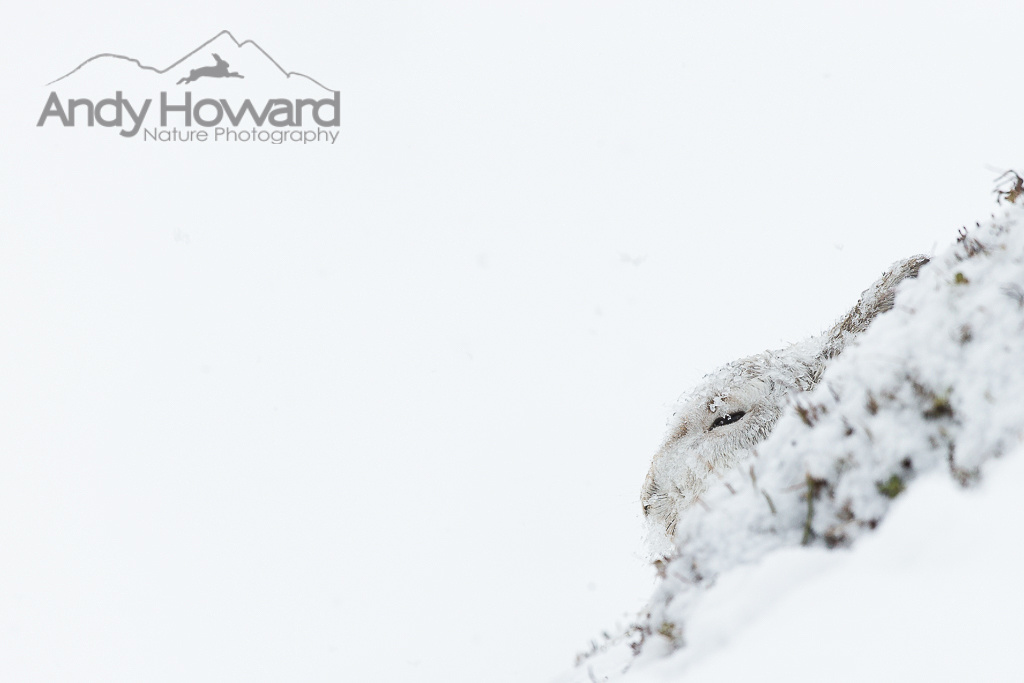 It will come of no surprise to those who follow me on social media that the winter months are my absolute favourite time of the year to be out and about with my camera, the days are short but when the conditions are right the quality of light is spectacular. Turning professional in the summer of 2015 has enabled me to get out this winter far more than ever before. In addition to this, my guiding, workshops and tours have meant that I've literally been out almost every day. The weather has been at times brutal but for someone that always looks at things in a positive light, the good days are the ones I remember most.

For me I look to my trusty friends the Ptarmigan and Mountain Hares for the first signs that winter is approaching. On 16th of October Rita, one of my regular Hares started to show the first signs of change in her pelage. This manifested itself in small white patches below her eyes and on her ears. 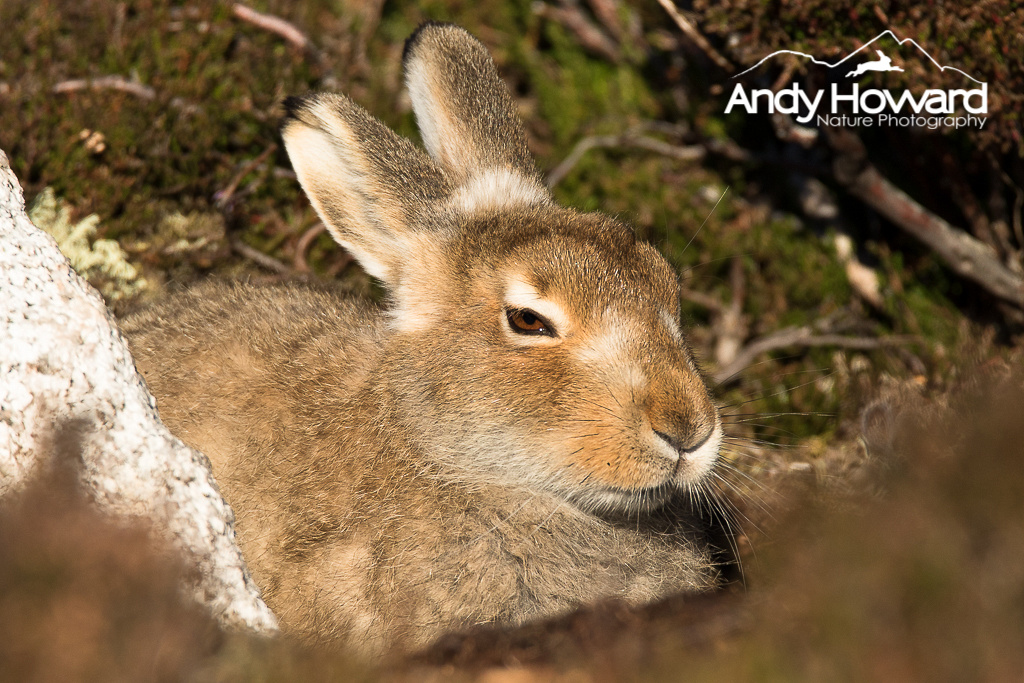 A few days later as part of a lens test I was doing for FFordes Photographic and Tamron I paid a visit to the Ptarmigan, and again they were showing early signs that winter was just around the corner. Their plumage was well into the transition to white. 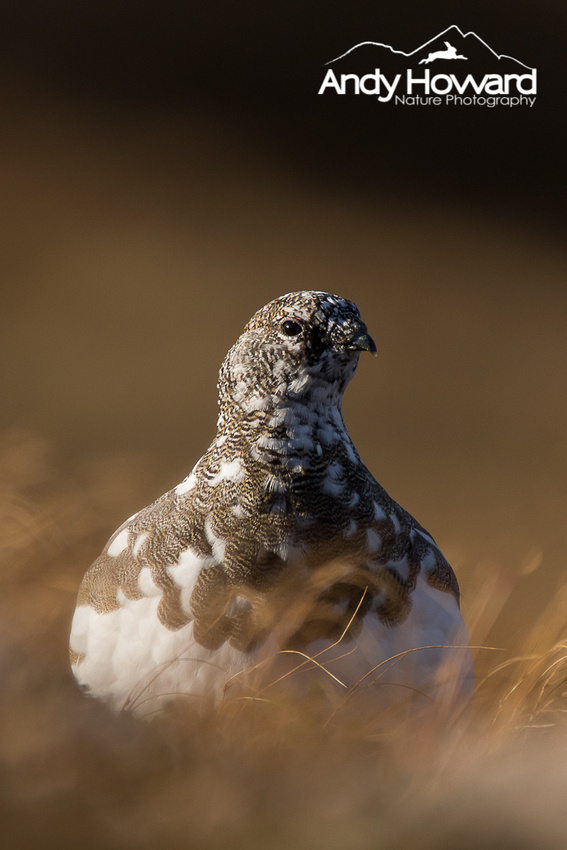 As temperatures started to fall and the nights started to draw in I could feel the winter chill in the air.

I started to think a bit more seriously about how light affects the mood of an image and how to maximise the available light. This came into play and became very evident on a bright sunny day in the Cairngorms. The target for this particular day was Ptarmigan. Bright conditions don’t make for good images so in this instance it was decided to work the margins of the shadow cast by the mountain, easier said than done and to get a Ptarmigan and the very narrow band of light to come together was extremely tricky, after more than two hours waiting for everything to come together, eventually our patience was rewarded.

Rita, a Mountain Hare I’ve been following for a while, now really started to show signs of her pelage turning white, and I caught up with her on a glorious evening in near perfect light conditions. 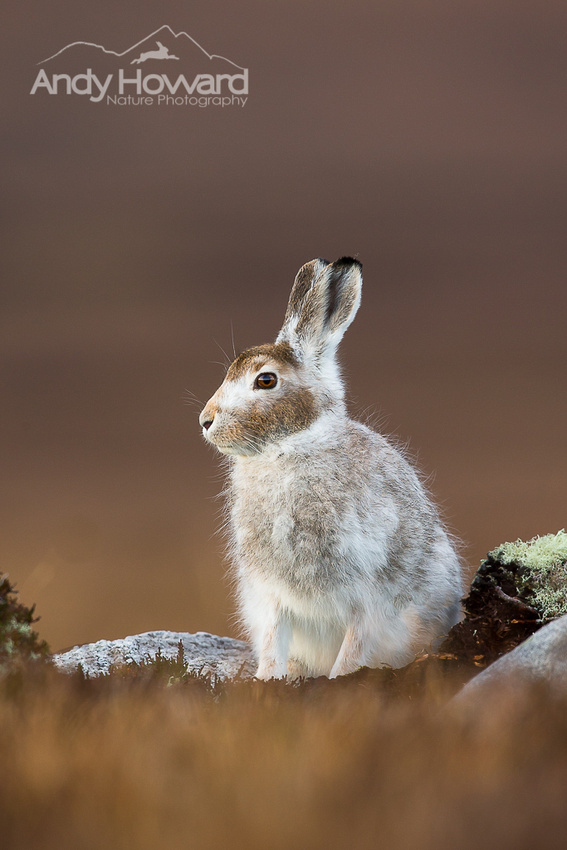 On the 18th a familiar friend showed up. I’ve known this Hare for over four years and his nickname is Bagpuss. Weirdly I found him in exactly the same form I found him in four years ago almost to the day! It was great to see him return and I looked forward to sharing some wintry photography days in his company. I went on to have many more encounters with him over the winter. 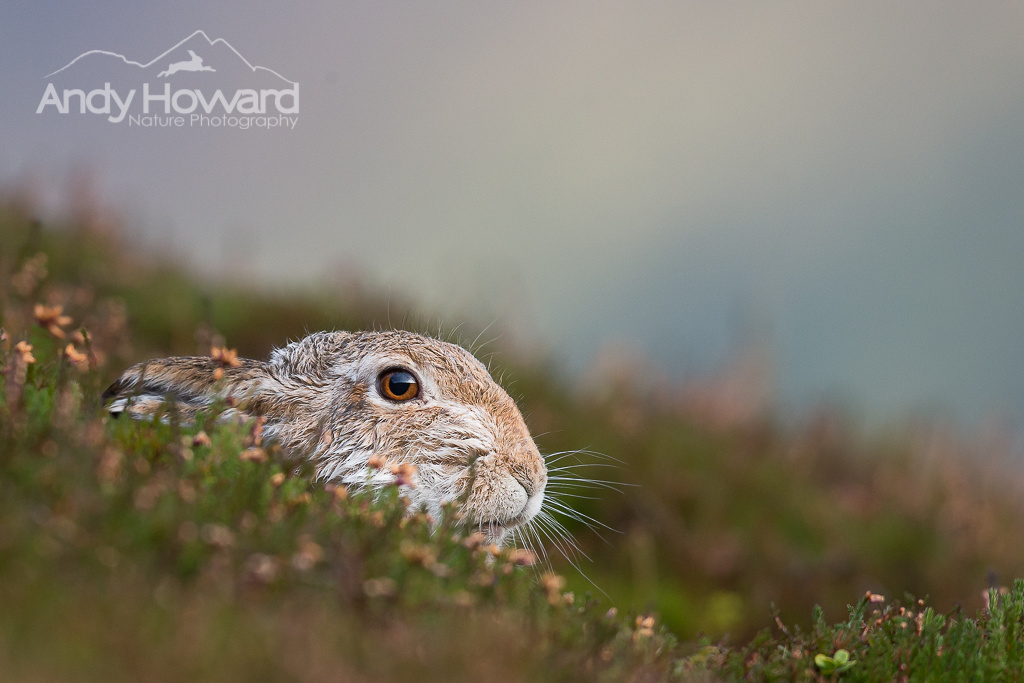 While we saw very little snow in during this month, this didn’t stop the Hares though as they continued on their mission to turn white. As most of you will remember December 2015 will go down in history for the tremendous and sustained rainfall and strong winds, the clouds were dark and heavy and this severely reduced the opportunities to head out with the camera. 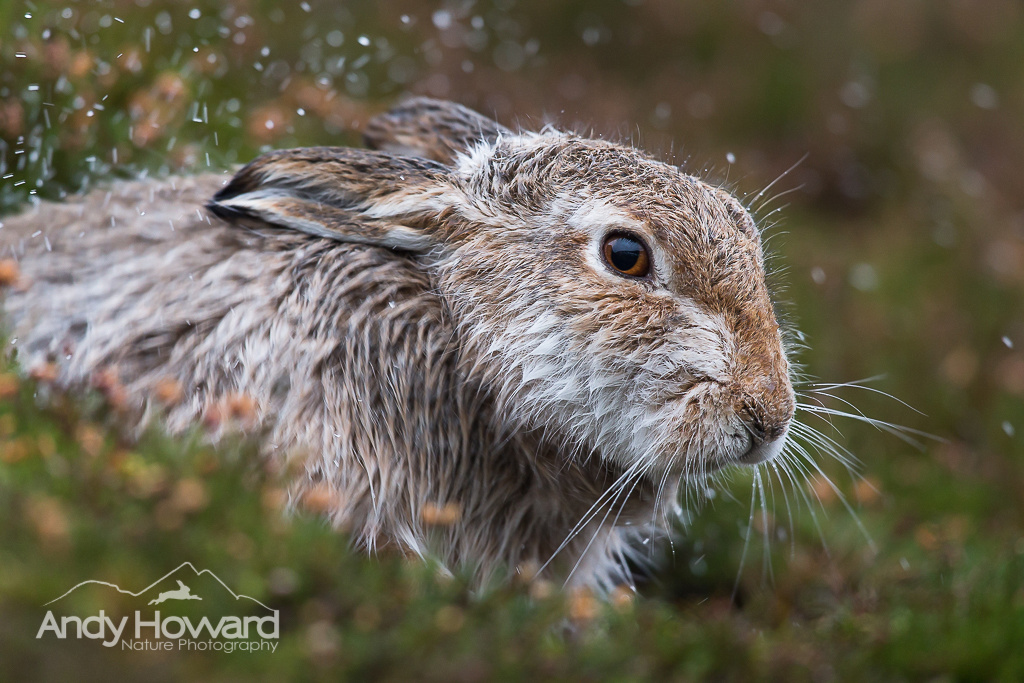 Mid-month saw Lyndsey turn thirty so as part of her present I decided to take her to Mull to photograph Otters as they had always been her bogey species. We decided to treat ourselves and stayed in a hotel and the deal was I would guide Lyndsey, as I would a client, on an Otter workshop. On day one we saw eleven different Otters and had an amazing close-up encounter with one as it caught and devoured a large Scorpion fish. Needless to say Lyndsey was delighted to be just five metres away from the action whilst capturing some stunning images. 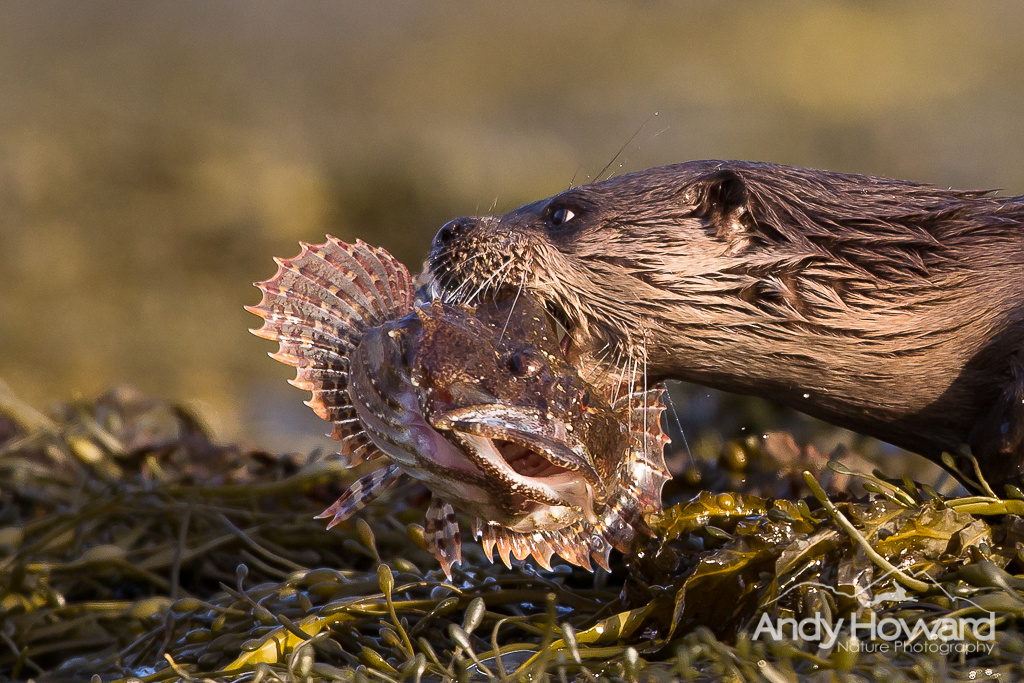 Hallelujah! At last some snow and by jiggers did we take advantage of it, not only on a personal level but with clients visiting on tours and workshops. On occasions we definitely had Lady Luck on our side and were gifted the most perfect photographic opportunities possible. Although we have less daylight hours during this month, the quality of it when it’s there is unbelievable. It’s soft, clear and almost dreamy. If only all months of the year could have this type of light! 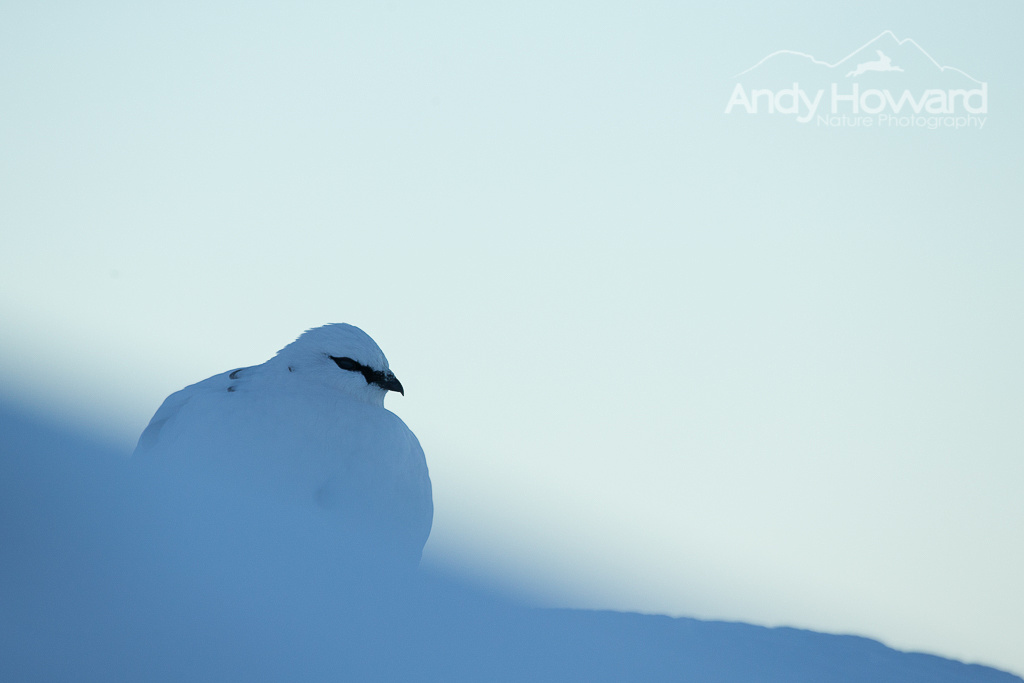 Many trips were made to the Mountain Hares, as well as a few to the Ptarmigan. In January they are looking mighty fine in their pure white plumage. I’m always searching for new styles of images of my five key species so I was particularly pleased with some of the new images I captured. 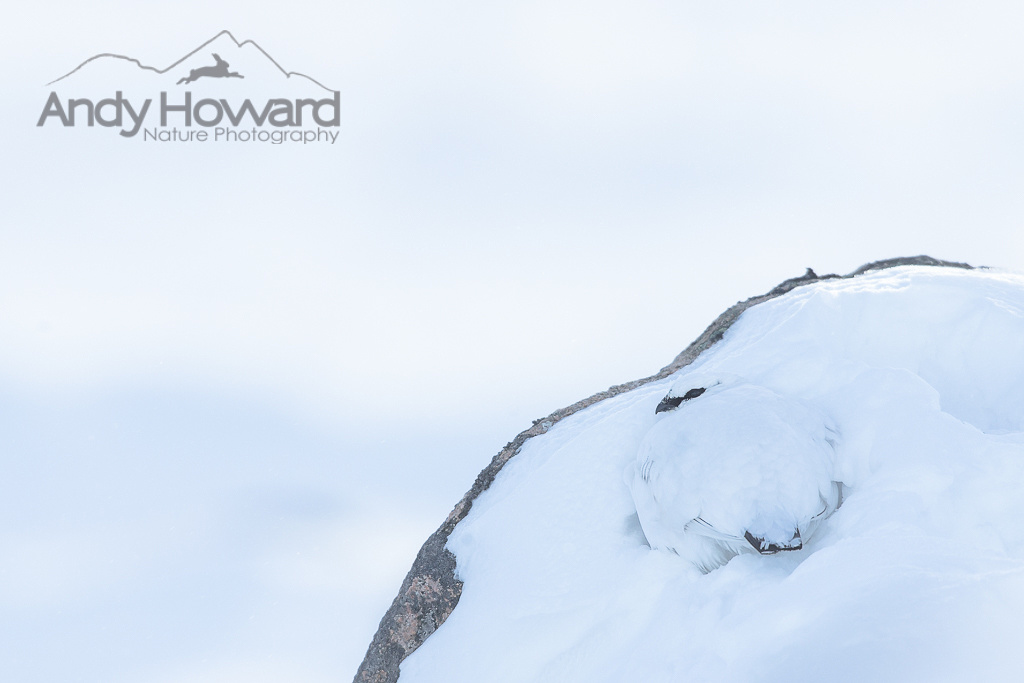 Red Deer are featured as part of my Winter Tours so to once again get nigh on perfect conditions to photograph them in was especially pleasing. 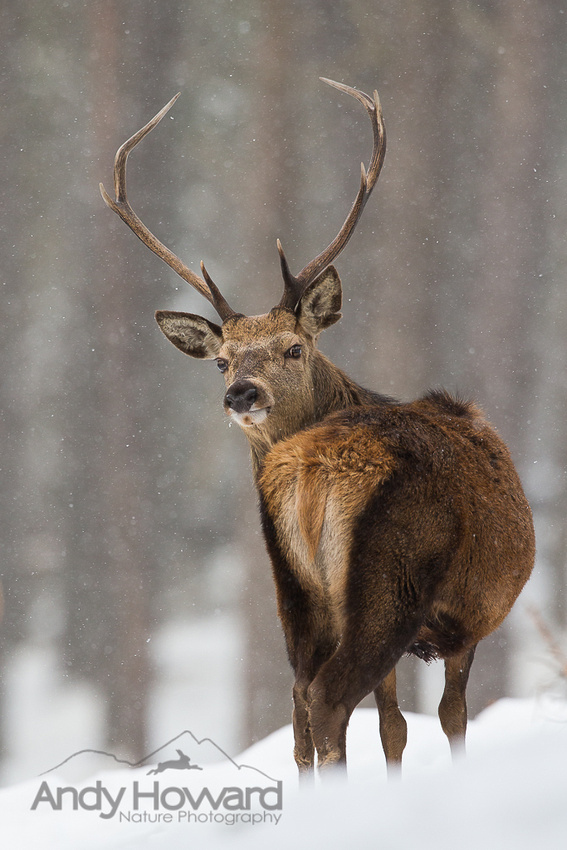 As too was a crazy day out with Lyndsey photographing Red Grouse. We knew it was going to be fun as we drove across a moorland road one snowy day. Let’s put it this way, you’re glad of a 4X4 with winter tyres when the drifts of snow are coming over the bonnet of the vehicle! 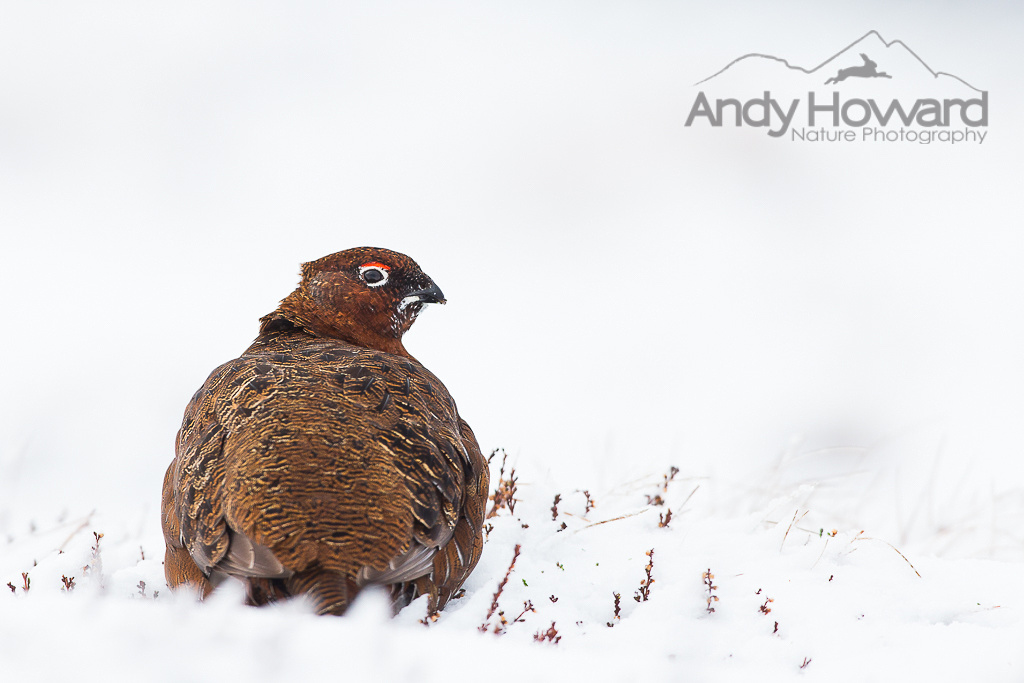 The Crested Tit feeding site still continued to deliver and was buzzing to the sights and sounds of the birds taking advantage of the extra source of food provided by our feeders. Over the past few years we’ve seen a noticeable increase in the bird life in our area of woodland, sometimes in biblical proportions! 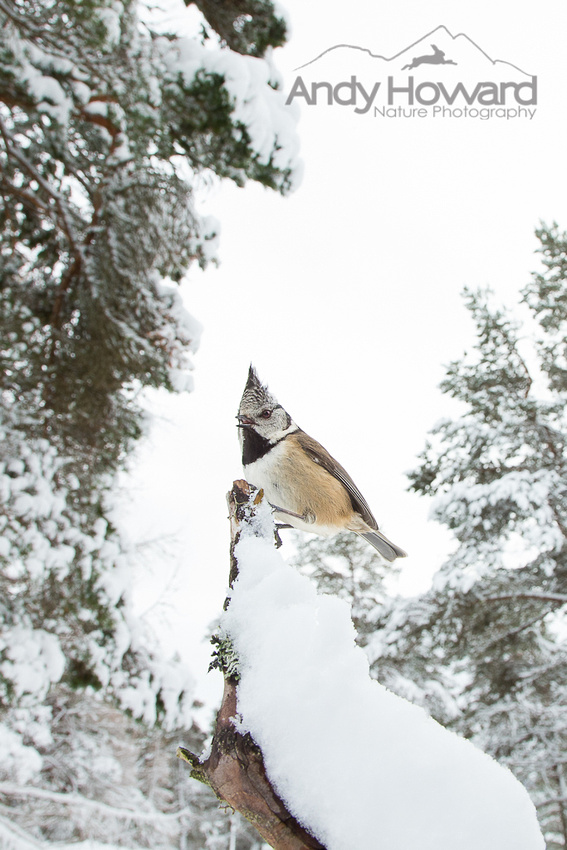 Much to the relief to both me and my clients the snow arrived within the first couple of days and stayed right throughout the month. Some of the days were particularly challenging with driving snow and deep drifts, as I’ve said in the past. To really understand a species you have to experience the weather they do. 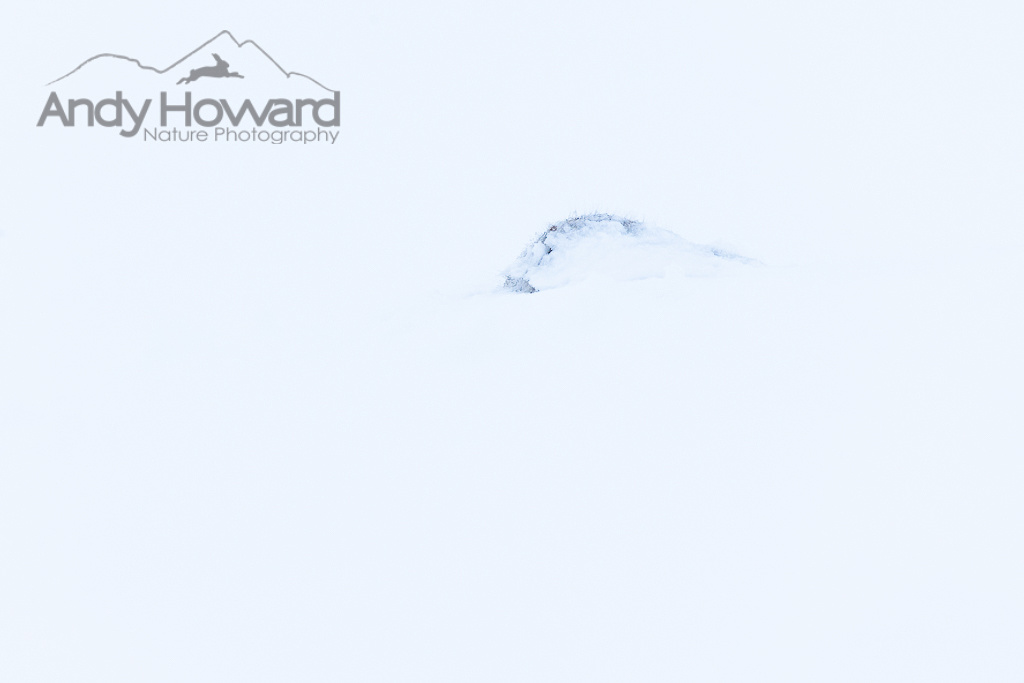 I was out almost every day during the month either to the Mountain Hares, Ptarmigan, Crested Tits, Snow Buntings or Ptarmigan. Lyndsey and I even managed to squeeze in a flying visit to London. Ironically we spent most of our time photographing some urban wildlife in Hyde & Regents Park.

I think it’s fair to say that everyone that spent time with me during February must have enjoyed it as most have re-booked for next year! 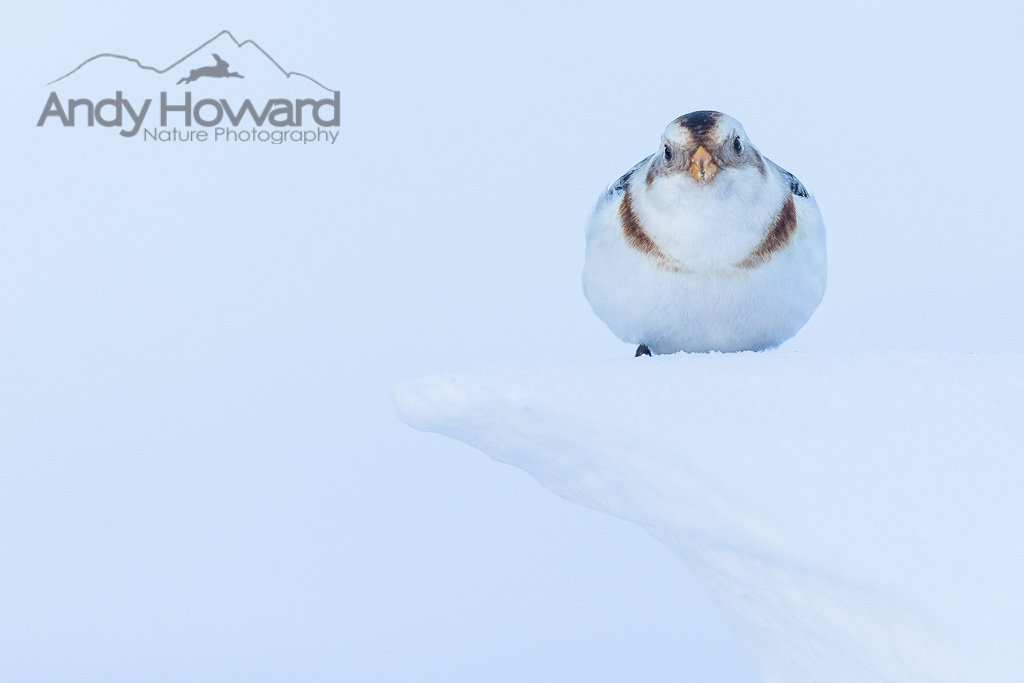 The first week of March was taken up with the second of my Winter Wildlife Photo Tours. The week started off with a trip to the Mountain Hares. There was a lack of snow on the lower ground but it wasn’t difficult to find some large patches to work around, and fortunately the Hares played ball, and used the patches we had chosen. 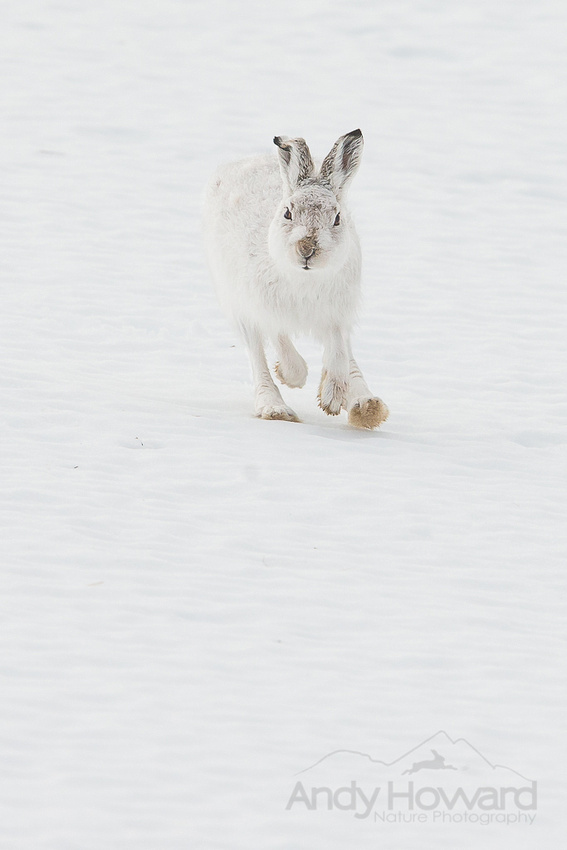 Day two was a combined day of Crested Tits in the morning followed by a couple of hours photographing Red Deer Stags, and we were delighted to be gifted a very snowy day to play in. 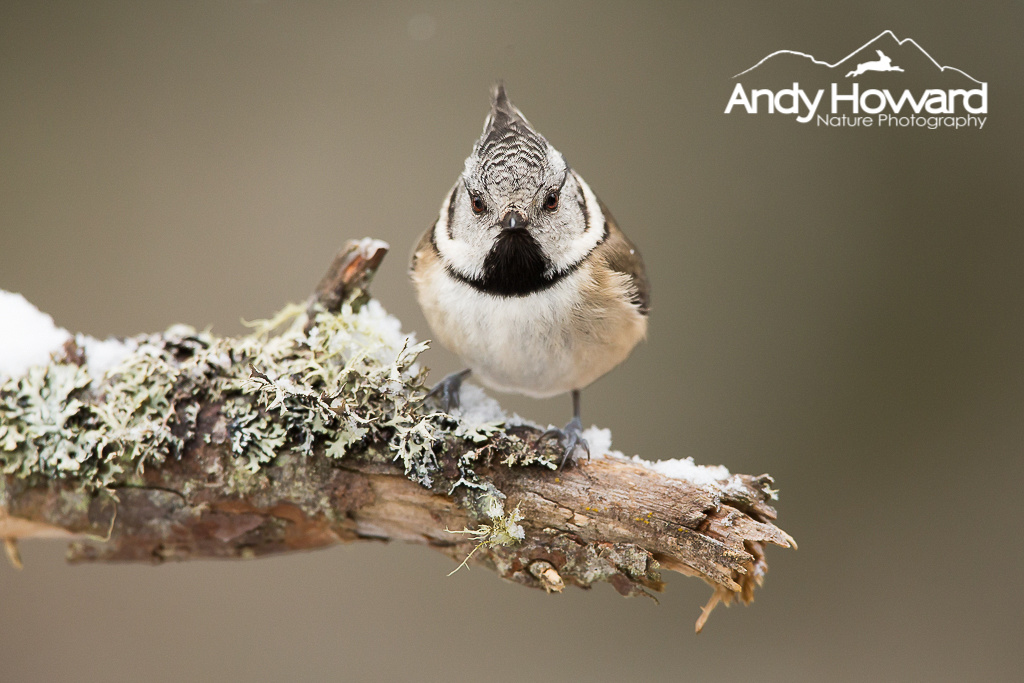 On the third day we took full advantage of the mountain forecast and headed to the high tops. En-route we said hello to the Snow Buntings and some very compliant Red Grouse. It was difficult to ignore these temptations but our target species for this day was Ptarmigan. Both the weather and the Ptarmigan were spectacular and a fabulous day was had by all. 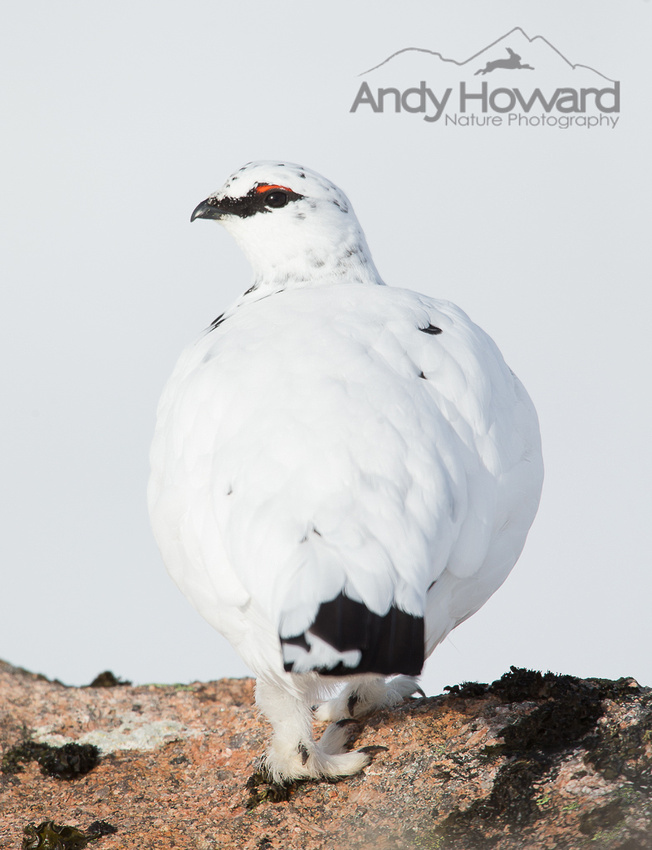 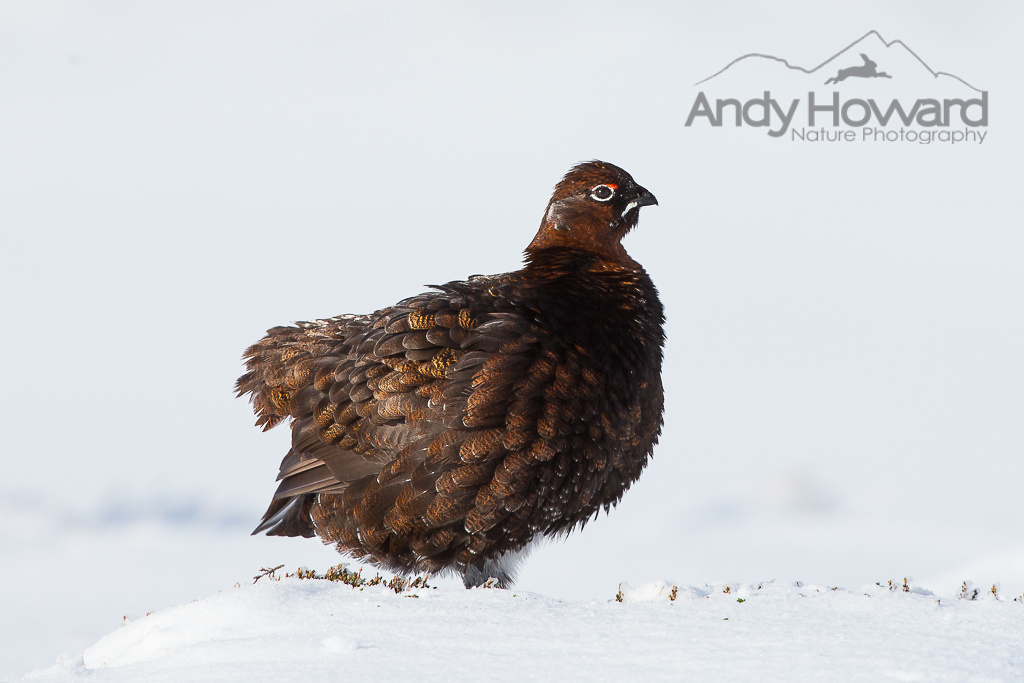 On the final day it was decided we should re-visit the Mountain Hares, nothing to do with the fresh snow that had fallen over night you understand?! Once again the Hares delivered and we managed to capture some very unusual images as fat flakes of snow floated lazily down to cover not only the Hares but the photographers too. After sharing such a fabulous week it was sad to say goodbye to my clients but I’m delighted to say that they have both re-booked onto one of my future tours. 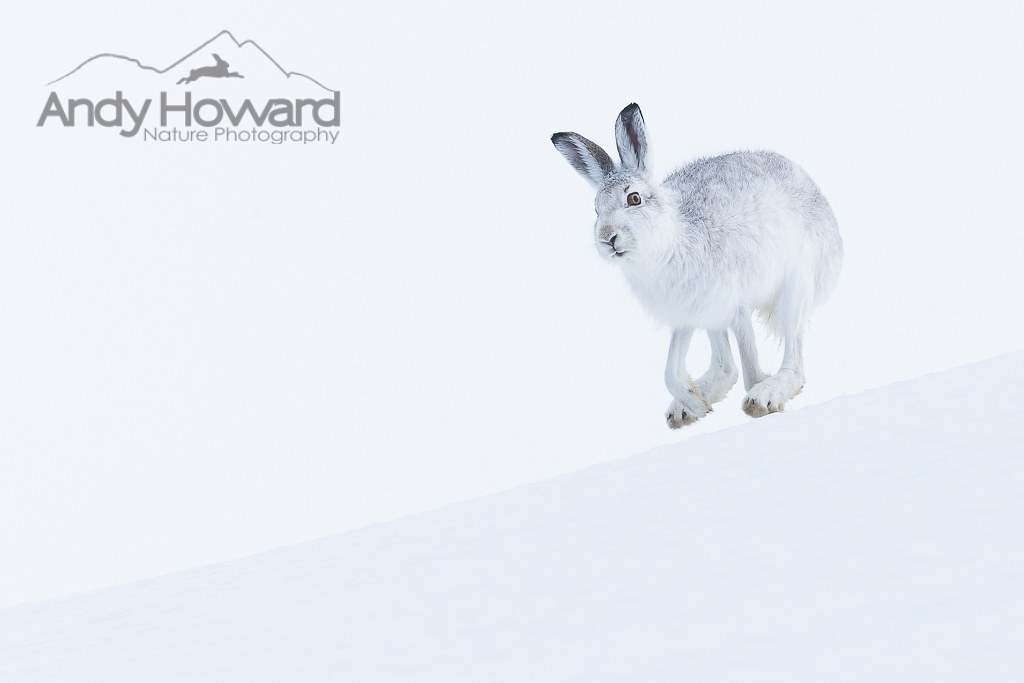 My next client was very specific about what he wanted, and this proved to be very difficult, but we rose to the challenge and delivered the goods! It’s good to be pushed out of your comfort zone and made to work that bit harder. The images taken on those days certainly are some of the best of the winter season, and says it all really, nothing comes easy. 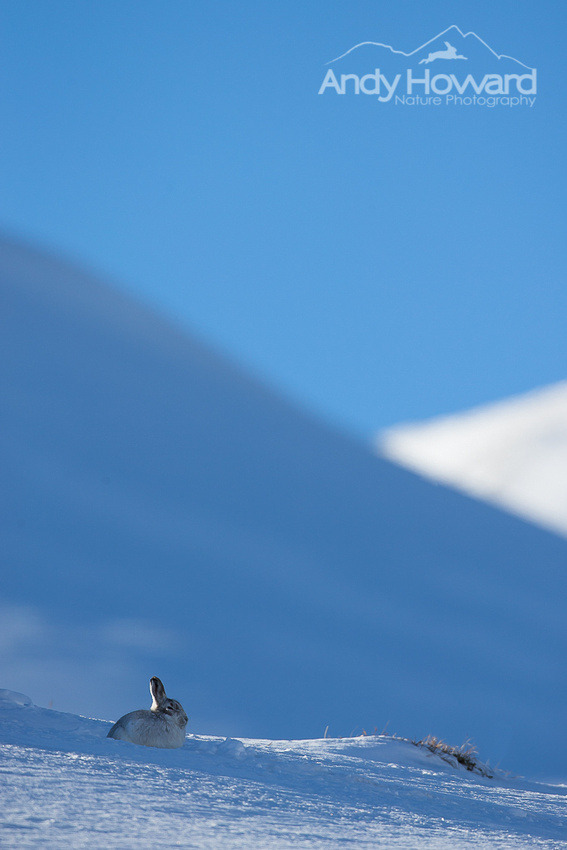 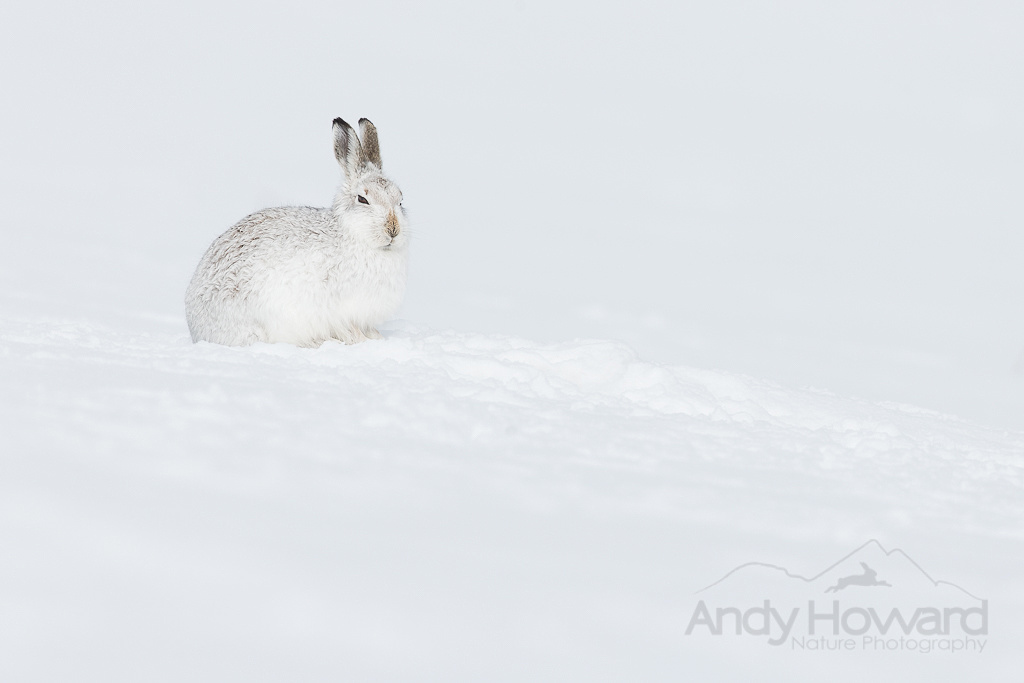 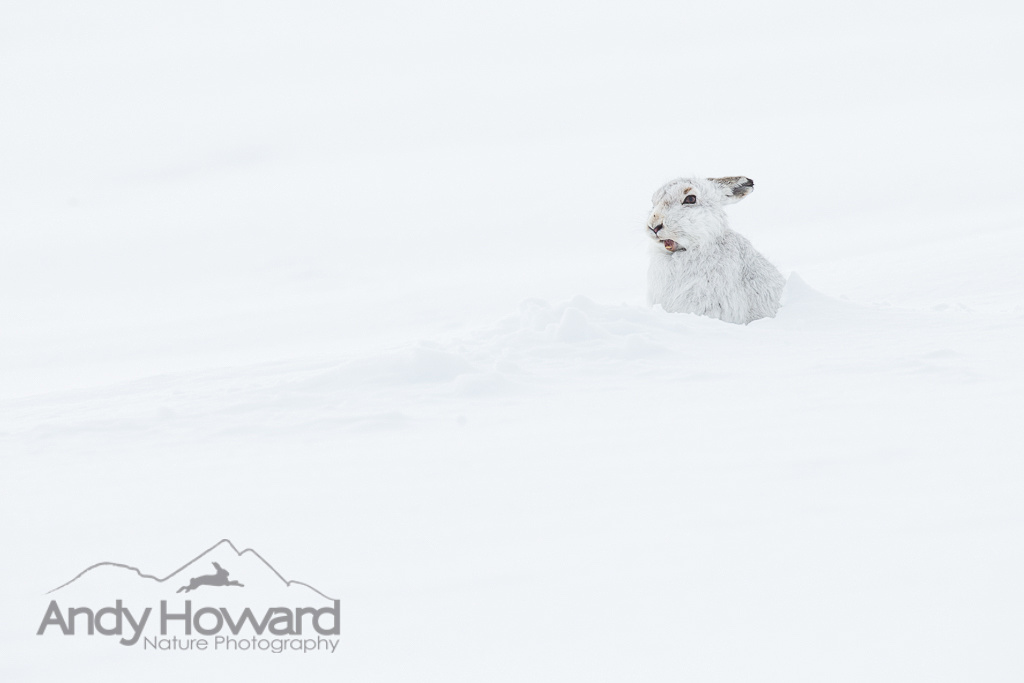 One of the highlights of our time in the mountains has to be a close fly-by from a magnificent White-Tailed Eagle. As I write this, towards the end of March, Winter is by no means over and I hope to share many more snowy images with you yet! 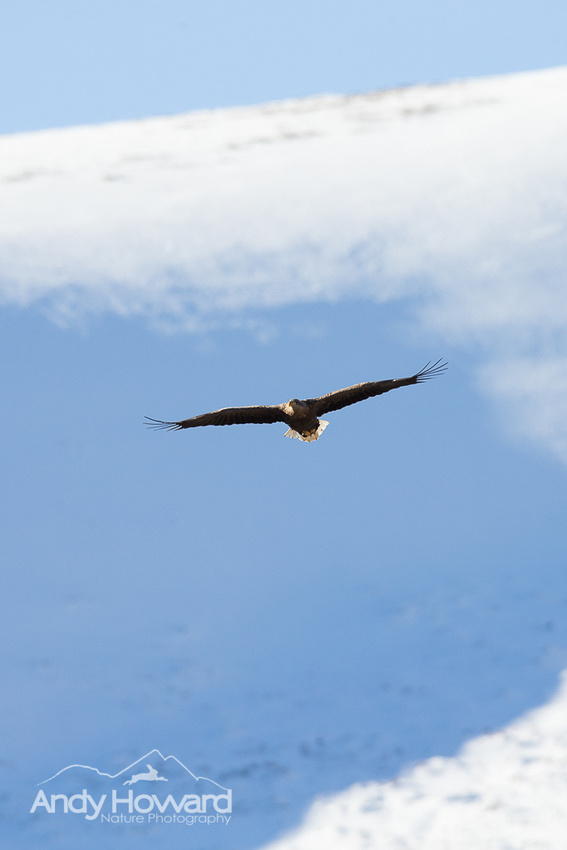 On a parting note I'd sincerely like to thank you all for the support & encouragement in the past few years. To make the leap of faith to give up my twenty-eight year career to do this full-time was an extremely difficult decision and one that wasn't taken lightly. I love to share my passion and love for photography with others and I hope to do so for a very, very long time to come. 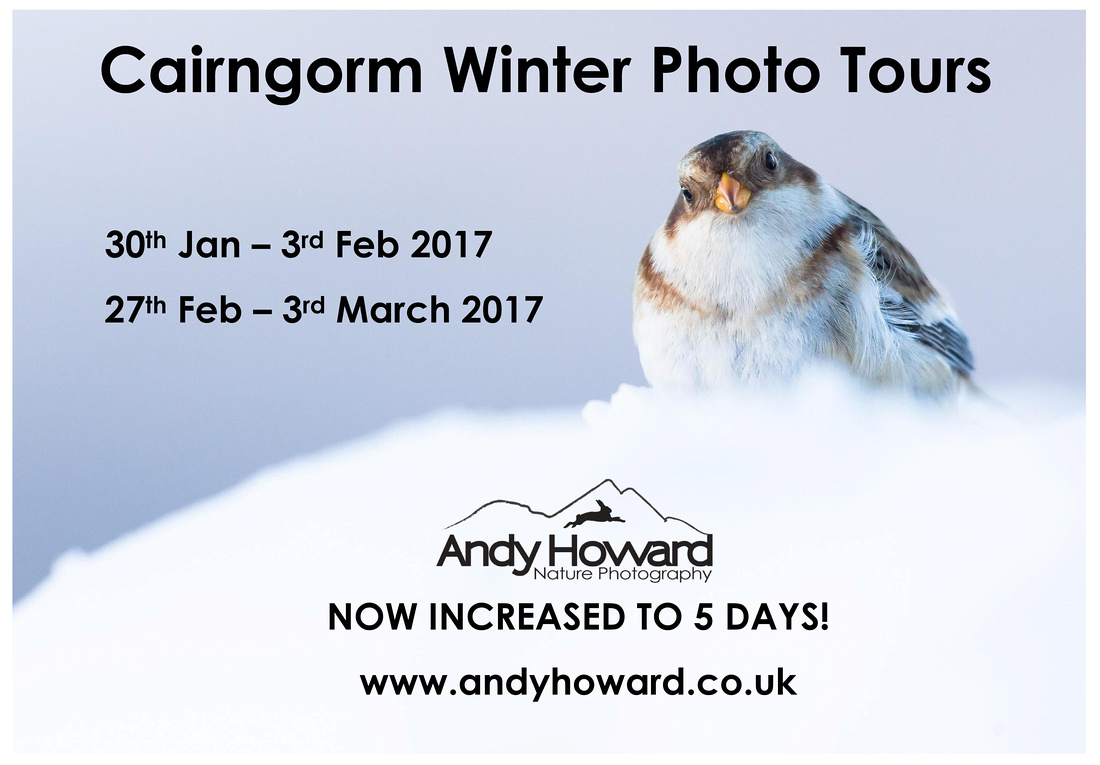